Consulting firms have been on the rise in recent times, with the increase in demand of the advisory business by most of the sectors. Few of the renowned consulting firms globally are Accenture Consulting, Capgemini Consulting, PricewaterhouseCoopers Advisory, Ernst & Young Advisory and McKinsey & Company.

Another player in this sector is Deloitte, which had dropped in an update on 26 June 2019, that its Australian domain has reported revenue growth of 13 per cent over the last fiscal year (2018).

Let us dig in and look at the company’s highlights from the Deloitte Australia FY19 report:

The company’s history in Australia dates to the 19th century in 1891, when the firm was originally established by Yarwood Vane and Co. and was regarded as a significant entrepreneurial business. After a century, driven by mergers, the firm commenced its operations under the name of Deloitte Touche Tohmatsu.

Presently (and since 2006), the company is known as Deloitte Australia. The company has approximately 790 partners and over 8000 people who work in 14 offices across Australia, Timor-Leste and Papua New Guinea. Acquisitions and alliances are a routine process for the company and its Australian headquarter is in Sydney.

Last year, in 2018, the company had recorded a revenue of A$2.013 billion, which was a 15 per cent rise compared to its prior corresponding period (FY17). This also marked the fourth consecutive year of a 15 per cent revenue growth.

Deloitte’s Report for the financial year ending 31 May 2019

The company has maintained its double-digit revenue gains ongoing, and reported a revenue of $2.3 billion for FY19, which is up by 13 per cent on the prior corresponding period (FY18). This marks the fifth consecutive year of a double-digit growth in the company’s revenue. The company attained great results particularly from the Victorian and New South Wales markets, while other regions also contributed to the same.

CEO Richard Deutsch, who joined the company last year in September, stated that the strong performance of the company was majorly driven by the increase in demand of the company’s advisory business, which has been a common phenomenon for the big four consulting firms (KPMG, Ernst & Young, Deloitte and PricewaterhouseCoopers).

The company’s audit business has continued to pace up over the years, driving consecutive double-digit growths. The company has significant transformation programmes, which run on a digital front and are technologically advanced and cloud based. The company’s growth has been sturdy in the field of cognitive automation, systems architecture, risk analytics, cyber businesses and robotic capabilities.

In times of the Financial Services Royal Commission, the company has great leverage over the demand generated for its remediation businesses. At the beginning of this year, the initial months of the federal election did have an adverse impact on the business. However, this eventually got better in building the confidence of the business community, as a whole.

In FY19, the company was successful in conducting eight strategic investments through transactions. This depicts that Deloitte Australia in on track in tapping the right clientele and surging its strategy of inorganic growth.

Besides this, the company announced that it would introduce its 67 new partners, the term of which is effective from 1 July 2019. The company also has 72 lateral partners on board, in FY19. Across Australia, the company would be promoting 30 women and 37 men. It should be noted that, in its history of existence, the company witnessed a 45 per cent representation of new female partners, which is a significant milestone, promoting a professional inclusive environment. Post these additions, the partner number of the company would count to 880, with promotions in each business unit and market.

The company set another record of hiring 862 graduates in FY19, to become a firm with its staff count crossing 10,000, which is double than the number it was at, 5 years ago.

During the year, the company added the following businesses into its kitty, expanding its business base:

The inclusion of these small business into its realm depicts that the company is focussing on conducting a large chunk of its advisory business in the traditional auditing and assurance work.

2019 was truly a year of achievements for Deloitte Australia, as apart from the notable milestones mentioned above, the company was rewarded with the following accolades:

An Australian initiative, the company’s Building the Lucky Country series was developed to stir conversations and discussions across the media, government, business and industry associations, related to the Australian economy.

Let’s look at one such discussion and its inference, as per the report:

The Future of Work-The report states that the future of work has a very human face, which means that people, along with their unique interpersonal and creative skills are the future of business. Economists have mentioned that technology has truly been the driving change in various work methodologies and styles, but it still cannot be a prompt and apt substitute for people.

A study reports that unemployment is close to its record low across the globe and Australia is significantly impacted, with the present measure being the lowest since 2011. As per an expert, using technology to create more potent jobs bears the potential to aggravate the country’s national income in terms of GDP by approximately $36 billion in a single year. The report unveiled three myths that revolve around this discussion of the future of work:

In May 2019, the company conducted a survey on What Aussie millennials and Gen Z were really thinking and laid down the Top 5 millennial ambitions, as depicted in the image under: 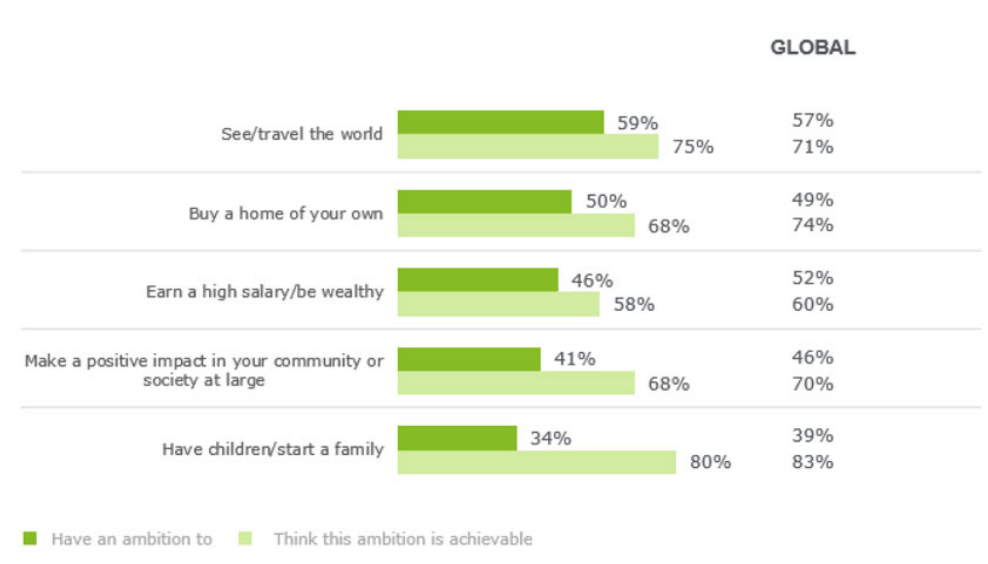