The WTI Contract is scheduled to expires on settlement of the contracts on 19 May. The Chicago mercantile Exchange hosts the largest oil focussed exchange traded product in the US, the WTI crude oil futures and United States Oil Fund LP, has been concerned on the issue and in order to prevent any sudden declines in future contract prices the exchange has taken several measures to reduce the open exposures prior to the settlement date.

With little indication of a reiteration of the unprecedented event, the crude oil future prices have recovered over ~62.8% as the Crude oil June future contract trades at US$30.68 a barrel as of 12:42 PM AEST on 18 May 2020. 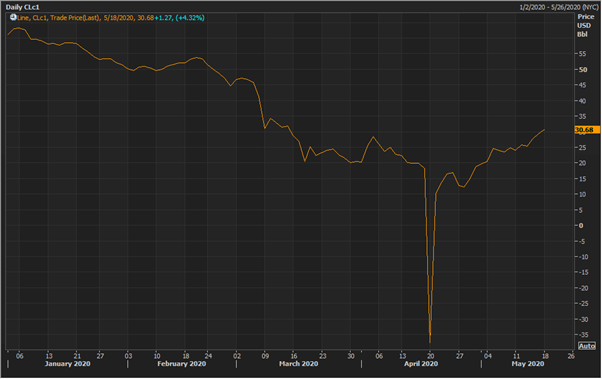 The bloodbath of 20 April 2020 would be a remembrance for market particpants as many small oil producers from Texas and North Dakota lost millions of dollars with oil trading in sub-zero levels, lower than -US$35 a barrel. Many of the oil producers have voluntarily reduced production and operating the oil rigs at reduced capacities and utilisation rates. The reduction in supply along with recent trends of rising demand leads the bull run for oil in the commodity markets. The au courant audience must know that for the consecutive second week, the US based firms operated the oil fields as lesser oil rigs operate during these weeks.

The World’s top exporter, Saudi Arabia has voluntarily announced a deeper cut of 1 million barrel with OPEC+ nations anticipated to maintain the supply cuts. Kuwait and Saudi Arabia agreed upon temporary suspension of operations at the Al-Khafji field.

Preventive Measures by the Regulatory Authorities

The U.S. Commodity Futures Trading Commission remains concerned and has issued an advisory to safeguard the trader’s interest against any repetition of the WTI May contract prices to extremely lower levels. An advisory on behalf of the Divisions of Market Oversight (DMO), Swap Dealer and Intermediary Oversight (DSIO), and Clearing and Risk divisions (DCR) was put out on 13 May 2020, to remind the Designated Contract Markets (DCMs), Futures Commission Merchants (FCMs), and Derivatives Clearing Organizations (DCOs) to prepare in advance for increased volatility, extreme negative downturns and low liquidity in certain contracts including Crude oil.

The advisory was issued on observing extreme volatility in the May 2020 Light Sweet Crude Oil Futures contract on the penultimate day of trading and expiry of the oil contracts on 20 April. It is to be noted that the Crude oil contract prices for May have been recovering since the crash and had recovered by ~28% on the day of release of the advisory.

US Federal Reserve Positive on H2, Vaccine Key to Complete Recovery by end of 2021

The US Federal Reserve chief Jerome Powell expressed a steady recovery in the US and global economy in absence of a ravaging second wave of coronavirus in the country. Mr Powell also mentioned that the recovery phase would heavily depend on the vaccine which as per Bill and Melinda Foundation could take up to 12-18 months to be commercially available for the common people, a delay in the vaccine development could delay the recovery of the economy. He anticipates a complete recovery in the US economy by the end of 2021.

A total of 1.486 million confirmed cases of coronavirus has been recorded in the US with over 89,562 deaths. The demand for crude oil is restricted on the back of reduced industrial activity, travel ban and extensive quarantine measures. An early recovery from the pandemic guarantees the recovery in both the domestic and global crude oil industry.

Oil versus Gold: What is Glittering today: Must Read

Australia has so far observed 7,054 confirmed cases much lower thanks to proactive measures by the government, a total of 99 have succumbed and with over 6,394 cases already recovered leaving just 660 active cases as Australia makes an efficient recovery. A faster recovery guarantees sharper revival of the economy and the oil demand. Several developed nations such as Japan have observed over 3.4% decline in the nation’s GDP pushing the economy on the recession belt.

A strong recovery of US as well as other consumers such as India is must for the revival of the global oil industry.

Shift of Crisis from a Health Hazard to an Economic Recession

Earlier BP's chief executive Bernard Looney had expressed that a portion of decline in oil demand will be permanent. The extensive quarantine measures have permanently changed the dynamics of the oil industry and the oil might not be able to touch its demand of 100 million barrels a day in the post COVID times.

The Anglo-Dutch conglomerate, the Royal Dutch Shell’s Chief Executive Ben van Beurden had earlier expressed a major uncertainty on the oil future. At times when the World’s leading oil producers are clueless on what the future holds for the crude oil, we believe a strong headwinds of economic recession in the oil industry would have extreme repercussion on the small oil players in the absence of demand recovery to its previous levels.