It’s just a day left for the Reserve Bank of Australia (RBA) to declare its October monetary policy decision. The financial markets are pricing high for a 25 basis point cash rate cut in tomorrow’s announcement, and a further 25 basis point cut by mid-2020, amidst the current economic scenario. The interest rate in Australia is already at its historic low level (1 per cent), and the RBA had already signalled for a further rate cut in the economy.

However, few market analysts believe that it’s time for fiscal measures to support the economy, along with the monetary measures. As per the analysts, there is a need for urgent fiscal stimulus, supported by an increased spending on “ready to start” infrastructure projects.

Some analysts are of the view that even a further reduction in interest rates will not be sufficient to stimulate the Australian economy. The economy is currently facing a high unemployment rate of 5.3 per cent and an inflation below the medium-term target range, despite two subsequent cuts in June and July this year. For these reasons, the analysts are pushing for the Australian federal government to take steps for revival of the economy.

Economists believe that infrastructure spending can possibly provide an important stimulus, creating an enormous number of new jobs in the market and injecting massive capital into the economy. However, in September this year, Scott Morrison’s government rejected calls to substantially boost infrastructure spending. The government is relying on its $158bn tax package to offer a much-needed stimulus.

Recently, Treasurer Josh Frydenberg notified that the federal government will propose new tax incentives to promote business investment, but not before May budget next year.

How Likely is RBA Rate Cut?

Although the market analysts are calling for fiscal stimulus, the chances of a reduction in interest rate cut next month have increased to 76 per cent. The analysts expect the interest rates to move down to 0.75 per cent in October, half of the rate that was at the beginning of the year.

Below are the reasons that might induce a rate cut in October 2019: 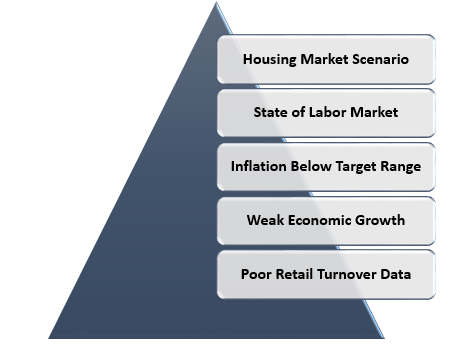 Let us discuss each one of them in some detail below:

The situation in the Australian housing market has definitely improved, suggests the recently released CoreLogic's dwelling values. As per the property consultant, the housing prices grew in Sydney and Melbourne by 1.6 per cent and 1.8 per cent, respectively through the first four weeks of September. Also, there has been a lift in the auction clearance rates in the both the cities.

The improvement in the property market was backed by easing of tight lending guidelines, two interest rate cuts, reduced uncertainty about housing and tax cuts. However, analysts believe that the RBA will reduce interest rates further despite a surge in property prices.

Though the housing prices are showing signs of recovery, the dwelling approval figures have not improved in the last few months. As per the Australian Bureau of Statistics, Australia experienced a fall of 9.7 per cent in dwelling approvals in July 2019 in seasonally adjusted terms. The decline in July was very large relative to the decline of 1.2 per cent in June 2019.

The RBA expects the housing market conditions to stabilise in Australia in the coming months, primarily owing to ease of lending regulations by APRA.

Although the unemployment rate jumped to 5.3 per cent, more than 34,000 new jobs were created in August. The increase in employment numbers was over double the number economists were anticipating. However, this increase was largely skewed to part-time work, with a rise of more than 50,000 persons in part-time employment.

According to economists, the employment growth in Australia in the past few months has been driven more by part-time roles rather than full-time. This suggests that although the country is creating jobs, the quality of jobs is not the same as it was previously. It could be disheartening for the RBA, which has been trying to lower the unemployment rate to attain full employment level.

The Australian CPI surpassed the analysts’ expectations through the year ended June Quarter 2019, rising by 1.6 per cent against the projection of 1.5 per cent. The CPI rose by 0.6 per cent during the quarter against the anticipation of 0.5 per cent. Although the inflation marked a significant increase during the quarter, the analysts did not see it enough for convincing the RBA to avoid rate cut in the near future.

As per the RBA, the headline inflation is likely to increase to little under 2 per cent and a little over 2 per cent in 2020 and 2021, respectively.

Australia observed its slowest year-on-year economic growth of 1.4 per cent over the year to the June quarter, raising speculations of a rate cut. This was the most sluggish pace experienced by the country since the global financial crisis. As per the ABS economist, the growth was driven by the external sector, while the growth in the domestic economy stayed steady.

According to the RBA, the reported GDP growth figures for the June financial year were surprising for the central bank. The bank had earlier projected the GDP growth at 2.5 per cent for the year to the June quarter. The weak GDP data sharpened the outlook for the official cash rate cut in October.

Australia’s retail turnover dropped by 0.1 per cent in July this year in seasonally adjusted terms, following a rise of 0.4 per cent in the previous month. The fall in retail sales was against the analysts’ expectations of a 0.2 per cent rise in turnover. The decline was led by Cafe, restaurant and takeaway services that slipped 0.6 per cent over the month.

Altogether, these domestic factors can possibly induce the central bank to move forward with its rate cut move next month. Besides these factors, the recent move by the US Federal Reserve to lower its federal funds rate, is likely to play as a contributory factor. In its second rate cut move, the Fed lowered the target range of its overnight borrowing rate to 1.75 per cent to 2 per cent.

Now, whether the RBA will follow the Fed footsteps in slashing its interest rates or will keep it unchanged at 1 per cent, would be an interesting watch.