Alice Queen Limited (ASX: AQX) is an advanced gold and copper exploration company, listed on the Australian Securities Exchange in 2004, with registered office in South Yarra, Victoria. Backed by an experienced team of mining executives holding the requisite corporate and technical skills, the company is working on a diversified project portfolio, including the 84.5 per cent owned flagship Horn Island in the Torres Strait in Queensland and 90 per cent owned Mendooran and Yarindury Projects in New South Wales.

On 5 December 2019, the company reported to have recommenced drilling program at the Yarindury Project (EL8646) in New South Wales.

In October 2019, Alice Queen had tested three holes at the project; however, the company has increased the number to a minimum of eight holes, as five additional targets have been generated and added to the current program. 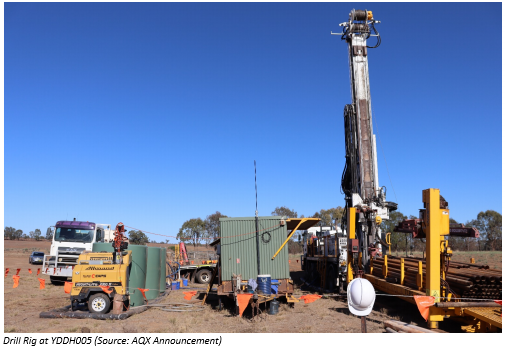 Focusing on a total of 11 targets, Alice Queen plans to test a wide range of basement magnetic features under younger cover in EL8646 (Yarindury), as part of the current program. These magnetic features are variously comparable to the magnetic signatures of major porphyry mineralisation at Cadia and North Parkes and to the magnetic character of the Boda discovery by Alkane Resources Limited (ASX: ALK) in the adjacent exploration licence to the south. 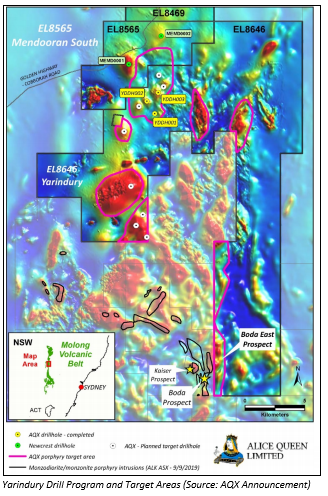 Additionally, the company reported that target generation work is ongoing and access arrangements are continuing across all the projects in the Northern Molong Belt.

In October 2019, Alice Queen had tested three holes at the project, with the results highlighting that the cover thickness of around 60 metres in the area drilled was considerably less than what was previously expected.

The drilling program (three targets) didn’t intersect significant mineralisation or porphyry-indicative alteration. However, petrological and litho-geochemical studies from these three holes indicates that the Molong Belt basement rocks intersected are most probably Late Ordovician in age, which is the specific age of the major porphyry deposits in New South Wales. The rocks are also of shoshonitic affinity, which is another encouraging indicator.