World-class airline company, Air New Zealand Limited (ASX: AIZ) today released its fuel hedge position as at 17 May 2019. The company hedged 82% of total fuel consumption volume (estimated) for Q4 Fiscal 2019 and has positioned itself till the third quarter of Fiscal 2020, hedging 42% as proportion of total estimated volume for Q3FY20. 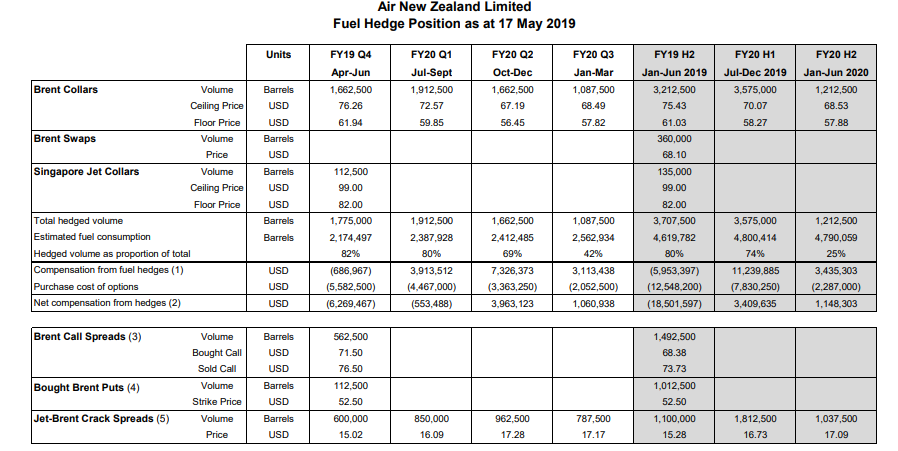 Snapshot of AIZ Fuel Hedge Position as at 17 May 2019 (Source: Company’s Report)

In a separate announcement to ASX, Air New Zealand also released an investor update for April 2019.

The company in collaboration with ChristchurchNZ recently launched a campaign ‘Christchurch. Explore something new’, aimed at inspiring New Zealanders to visit Christchurch. The campaign was launched after the airline and city agencies signed a Memorandum of Understanding (MoU) committing to exploring joint enhanced freight and passenger capacity, marketing activity, and other signature events.

As per the report, the campaign is designed to showcase all the new experiences across Christchurch. It would reportedly be show reeled through a featured video, eye-catching images of the city, and a complete online game in which players would reportedly get the chance to win a trip for four to Christchurch from anywhere in New Zealand and daily prizes of 100 Airpoints Dollars™.

Annabelle Fowler, General Manager Market Development and Retail Sales of AIZ, stated that the overall objective of the campaign is to supercharge tourism in Christchurch as the city has demonstrated outstanding developments in the recent past. New restaurants, artworks, bars have been opened at a phenomenal rate, not seen elsewhere in New Zealand.

Classic Christchurch and Canterbury region are the centre of attraction of the city, which would be presented as the key highlights in the campaign to encourage kiwis to visit Christchurch.

The airline is progressing well in offsetting its carbon emission footprints. Air New Zealand and its customers have together bought over NZ$1 million worth of carbon offsets under FlyNeutral, a voluntary carbon offsetting programme of the company. The programme enables customers to contribute towards healthy environment by choosing to offset the carbon emissions associated with their flights while booking online and the funds collected via this directly goes for the purchase of certified carbon credits, which help to remove carbon from the atmosphere.