The presentation begins with an overview of the company. OMH Group is a manganese and silicon specialist that is involved in mining, smelting, and trading, powered by sustainable hydro-power, pursuing growth as well as natural diversification into new commodities like silicon metal. The company got listed on ASX 20 years back on 12 March 1998. It now belongs to the S&P 300. The company has unique exposure to the Mn/Si space which is an essential element to steel as well as the modern world. Although the company is Asia-centric, but it operates across the globe including South Africa, Japan, Australia, etc.

The team of Om Holdings includes Low Ngee Tong, who is the executive chairman, Zainul Abidin. Rasheed is the Deputy Chairman. Peter C. Church (OAM), Julie Wolseley, Thomas Teo and Tan Peng Chin are the Non-Executive Directors of the company.

It may be exciting to know that manganese ranks fourth amongst the most consumed metal after iron, aluminium and copper. It looks like iron and is Brittle, hard and a silver-grey metal. More than 90% of the demand for Manganese comes from steelmaking and cast iron. There is no substitute for this metal, and it cannot be recycled. The other metal is Silicon (Si), which is in the form of quartz and is the most abundant element in the earth’s crust.

The company wholly owns OM Manganese Ltd. The Bootu Creek mine, which is located in the Northern Territory, Australia contributed A$229.1m in 2018, an increase of 68% year on year basis. The smelting division, for five years from construction contract, has generated A$859.1 million in segment revenue.

Before 2017, the company’s strategy involved Early risk diagnosis, planned for diversification and to secure competitive power. For this, the company successfully launched Sarawak smelter. In 2018-2019, the strategy of the company was to have an organic expansion and also to go up the value chain. For this, the company secured additional power. Other than this, the action involves Tailings retreatment, Sarawak sintering as well as the feasibility studies for new products.

In future, the company will be focusing on high grade silicon metal, Capacity expansion, custom-refined alloy for partners and the raw material strategy.

After the Sarawak smelter investment, the company in 2018 declared a dividend of 5 cents per share. 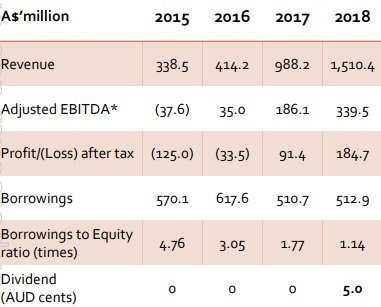 Company’s financials as per ASX announcement on 4 April’19

On 18 March 2019, the company provided an update on the mineral resource, ore and exploration activity at Bootu Creek Manganese mine.