What is an IPO?

IPO stands for Initial Public Offering and it refers to the process of offering shares of a private company to the public, for the very first time. Well established firms use it to let shareholders exit few/all ownership by selling stocks to the public whereas growing firms can generate requisite funds.

Process of an IPO:

The events that take place in an IPO are discussed below:

Advantages of being listed:

The main reason companies decide to go public is to raise money. Apart from the prestige and brand equity that a company gets when their stock is listed on any stock exchange, there are quite a few advantages of being public on a stock exchange.

Let us look at pros of being listed on a stock exchange:

Disadvantages of being listed:

The Australian Securities exchange has had quite a few listings off late. Below mentioned are few of these:

Let us now look at few upcoming listings on ASX along with their recent updates:

On 12th April 2019, the company announced St Kilda Football Club as its official partner. Chris Larkins, Saints General Manager of Commercial stated that the company as a partner, would be of great help in the Chinese market.

The company had lodged its replacement prospectus recently to issue 40 million Shares at an issue price of $0.20 each, to raise up to $8 million before costs with a minimum subscription required to raise at least $5 million.

IXC is a bio-pharma company focused on the re-purposing of an existent approved drug called Exenatide, which is meant to treat neurological conditions derived from or involving raised intracranial pressure, like traumatic brain injury, acute stroke and Idiopathic Intracranial Hypertension.

To repurpose and commercialise Exenatide, the company is raising $10,000,000 in new funds. It would have rights to accept oversubscriptions up to an additional $2,000,000.

Other activities for this commercialisation include: 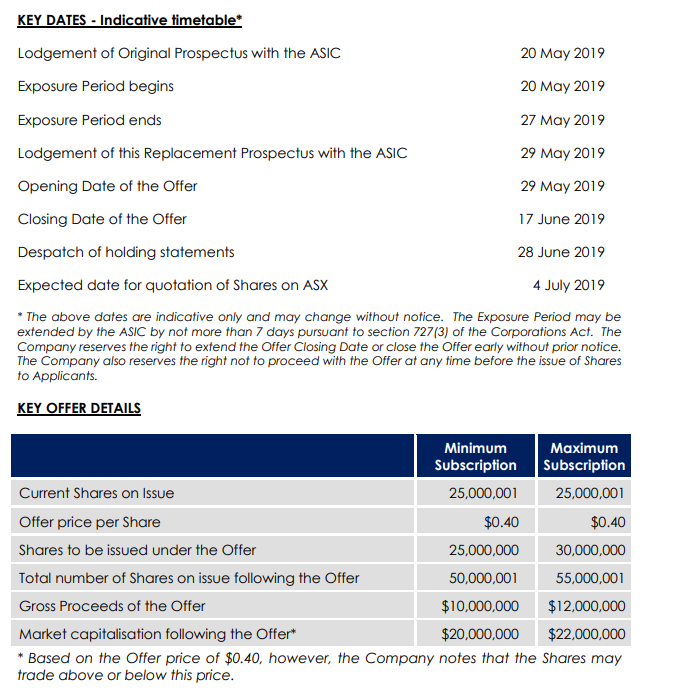 Listed on ASX on 6th June 2019, RLT is an emerging Producer of helium and liquefied natural gas. In the South African region, it has the foremost and only production right of onshore petroleum. The company is also listed on Johannesburg’s AltX exchange.

The initial offer raised $10 million with oversubscriptions via the issue of 12,500,000 CDIs at a subscription priced at $0.80. The funds raised through the offer would be used for additional exploration and further expansion of the Virginia Gas Project, which is deemed to be amongst the richest helium concentrations of the world.

Apart from this, the company also appointed Dr David King on its Board as the independent, non-executive director.

Besides this, the company announced on 5 June 2019, that it wished to introduce a long-term incentive, namely a Bonus Share Plan to align employee and shareholder interests and to incentivise and retain participants.

Awaiting listing on ASX, VOL is a workspace provider aiming to make tailored and custom packages for individuals and their business, giving them fully equipped, functional and professional workspaces that can be hired or leased as desired. The company delivers executive 6-star services, making its count in the list of the most flexible workspace providers in Australia. The company also provides serviced offices, co working spaces, virtual offices and meeting spaces. Victory Offices currently has 19 locations (as at the date of this Prospectus) with 14 in Melbourne, three in Sydney and one each in Brisbane and Perth.

The company recently released its prospectus and provided the key highlights as follows: 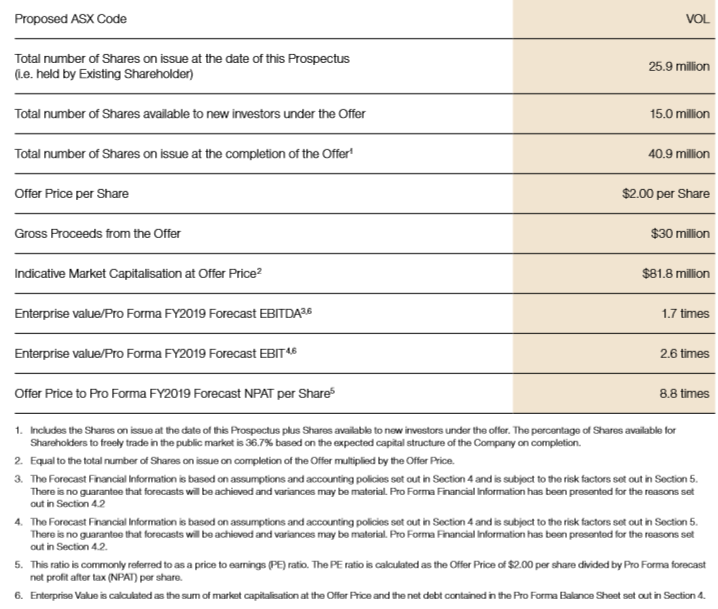 On the financial end, as on 31 December 2018, on a pro forma basis (assuming successful completion of the Offer), Victory Offices had cash and cash equivalents of $27.4 million. 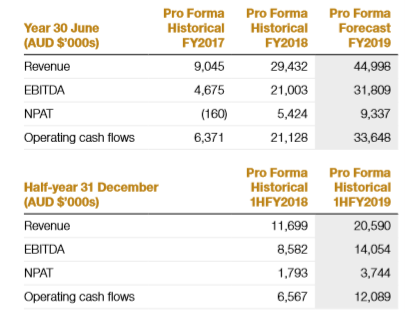 Tubi Limited is a plastic pipe specialist company which also is an operations innovator, founded in 2009 by Marcello Russo. The company caters to the irrigation, power, mining, water infrastructure, shale gas and LNG and pipe relining sectors. The company functions in the US and New Zealand regions and is headquartered in Australia.

Few other company products are: 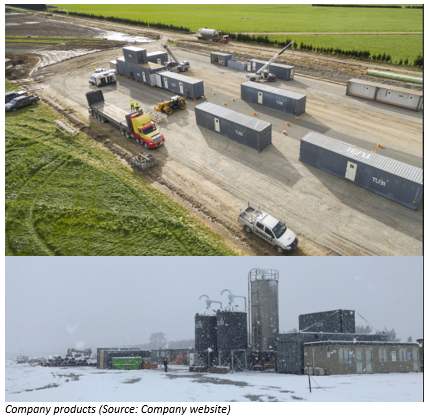 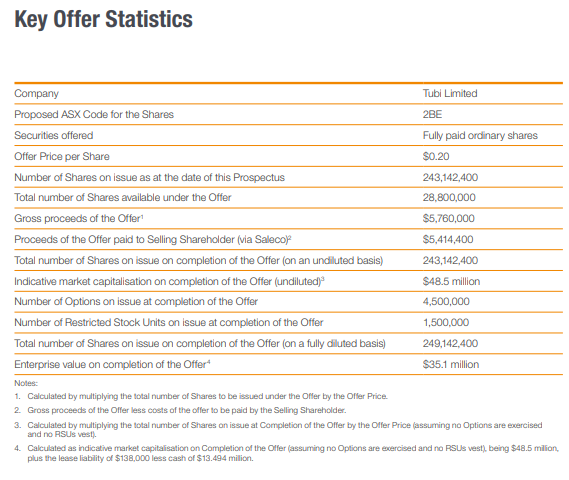 It was stated that there are 3 key strategies that the company follows:

The company’s existing customers include MPS Enterprises Inc and Iplex. It targets HDPE pipe users, distributors and/or manufacturers with huge volume requirements in isolated areas where traditional fixed plants are more than 250km away from demand.

The company’s revenue increased by $7.1 million in 1H19, given the higher selling prices and higher production levels. Below is a snapshot of 1H19 compared to 1H18 as provided in the company’s prospectus: 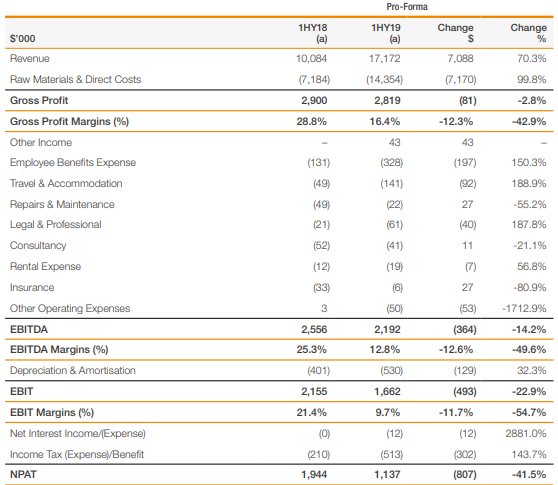