The Retail Sector is the second largest employer in Australia after the Healthcare Sector. The sector is a very crucial part of the Australian economy with retail sales forming a significant part of it. Talking about the key market trends, the sector has been facing disruptions with the change in the retail landscape due to rising influx of foreign companies. The entry of new players has led to a change in consumer preferences which calls for formulating new approaches in retailing.

As per a market report, Australia’s retail sector grew at a rate of 3.7% year-on-year in September 2018. The sector witnessed growth despite the low increase in wages and increased household debt. Housing market registered a strong growth due to low interest rates and increase in household credit.

Major Challenges in the Retail Sector: Due to an increase in the competitive pricing, consumers now prefer to delay buying a product and look for alternative options abroad which provide a cheaper price. In addition, the emerging trend of buying and selling through social media platforms such as Facebook and Instagram also call for businesses to take advantage of the new trends to drive their sales by putting forward their brand in front of the right audience at the right time. The entry of foreign companies also poses a challenge by inducing change in consumer preferences, as discussed in the paragraph above.

Thus, the changes happening in the retail industry demand the retailers in Australia to modify their business models to adapt to the latest trends in consumer preferences and technology.

Meanwhile, the sector will also be impacted by Westpac-Melbourne Institute measure of consumer sentiment that dipped 4.1% in the month of July due to decreasing expectations about personal finances and the economy over the next year. The recent tax cuts by the government and interest rate cut by the Reserve Bank of Australia to 1% which was expected to boost expectations, unfortunately saw an opposite reaction from consumers. Expectation about the economy dipped to its lowest level in four years, in a year’s time. Though the rate cut by the RBA was aimed reducing the unemployment rate, the survey reported an expected lift in unemployment.

Let’s now have a look at the major players in the Retail Sector:

Kogan.com Ltd (ASX: KGN) operates in the retail sector through its portfolio of businesses. The company on 10 July 2019, updated the exchange that Blackrock Group has ceased to be a substantial shareholder of the company effective 8 July 2019.

In another recent update on 1 July 2019, the company announced on the agreement signed with Splitit Payments Ltd (ASX: SPT), to provide its instalment payment solution for online transactions in Australian region through the Kogan.com website.

In the recently released business update, the company reported year-on-year active customer growth of 23.4% for Kogan.com. Active customers for Kogan Mobile grew by 40.6% year-on-year, as on 31 March 2019. Kogan Internet reported active consumer growth of 78.7% over the same period. In 3QFY19, the company witnessed gross transaction value growth of 17.5% on pcp. Revenue increased by 9.5% and gross profit by 28.4% as compared to 3QFY18. EBITDA for the quarter increased by 96.4% on pcp unlike the decline of 5.7% during first half.

Metcash Adds to Retail Skills on Board

On 10 July 2019, Metcash has added to the pool of retail skills by appointing Super Retail Group CEO, Peter Birtles and veteran retailer Wai Tang on the Board as non-executive directors.

Wai Tang has an experience of 30 years in retail and has worked as Chief Executive of Peter Alexander, a sleepwear brand in the past. She also worked as an operations director with Just Group. Her prior experience also includes stints with socks and jocks company, Pacific Brands as the general manager of business development. In addition to be a non-executive director at Metcash, Ms Tang holds a similar position with JB Hi-Fi, Ovato and Vicinity.

According to analysts, the company also needs to appoint a non-executive director with wholesale experience. Addition to the retail skills will not be that beneficial for the company as Metcash is planning to invest on opening new stores and buying & refurbishing stores to address the growing customer demand which will initially be managed by the company rather than independent retailers. This will not require the added retail experience for operation.

During the financial year ended 31 March 2019, the company generated underlying profit after tax amounting to $210.3 million, down 3% on prior year. Underlying EPS for the period amounted to 22.6 cents, reporting an increase of 1.8% owing to the share buy-back. The period was characterised by solid operating cash flows and strong balance sheet with declaration of a fully franked final dividend of 7.0 cents per share.

JB Hi-Fi Limited (ASX: JBH) is engaged with the retail of home consumer products. The company recently on 1 July 2019 updated that Pendal Group Limited (ASX: PDL) ceased to be a substantial shareholder of the company. 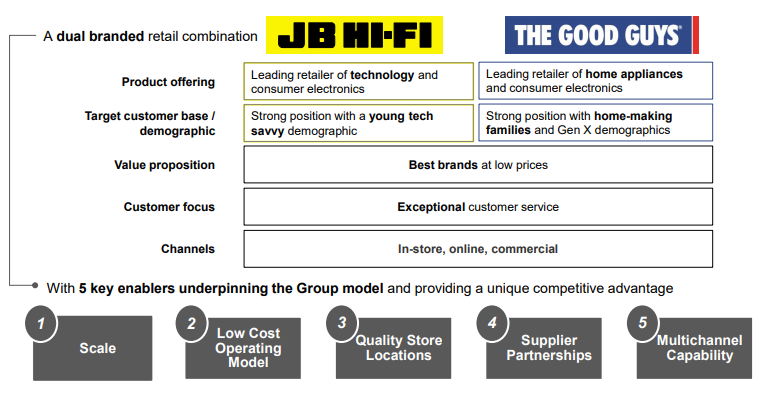 The company reaffirmed FY19 guidance of total group sales expected to be approximately of $7.1 billion.

Retail Food Group Limited (ASX: RFG) is currently, in the process to refinance its debt after the share prices collapsed during the past two years, due to accusations regarding the management of the company being unethical and mistreatment of franchisees. The company has appointed 333 Capital as an advisor to the matter.

The above factor also adversely impacted the performance of the company during the first half. During the half year ended 31 December 2018, the company reported an underlying NPAT of $6.6 million, down 73.4% on prior corresponding period. Statutory EBITDA loss during the period further increased to $112.5 million as compared to $100.8 million in the prior corresponding period.

The company is currently focusing on repairing its balance sheet through continued evaluation of options available including potential asset sales, refinance, alternative debt and new equity. Considering the challenges during the first half, the company provided FY19 underlying EBITDA guidance in the range of $43 million - $48 million.