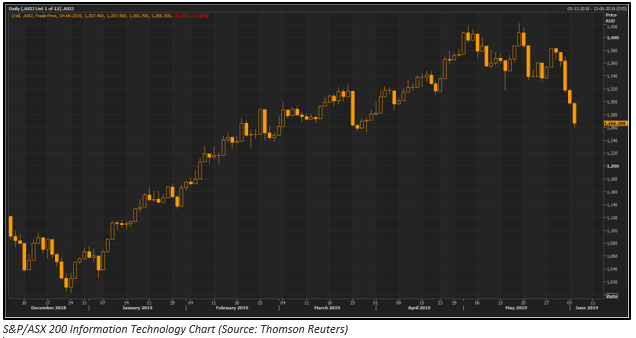 Letâs have a look the three IT stocks as follows:

Today on 4 June 2019, the company announced that its Operating EBITDA before Strategic R&D for the year to June 30, 2019, will be around A$20 million, above the previous guidance. It reflects the greater certainty of the company around client take-up along with its ongoing focus on delivering transformation.

The company also announced that it had signed a 10-year contract for delivering a major back-office transformation programme for Canada Life UK. Canada Life is a subsidiary company of Great-West Lifeco Inc, and it provides insurance and wealth management products and services.

With this Canada Life agreement, the company expects revenue of A$50 million over the upcoming 10 years.

Canada Life has opted for Composer platform in order to deliver a modern back-office wealth solution so that it can replace its existing administration systems that will consolidate onto the GBST Composer platform to help in the launch of new propositions as well as products for the UK market.

Mr DeDominicis, the CEO of GBST Holdings Limited, commented on the agreement and stated that the Canada Life contract is proof of the progress being made on its software and the E-VOLVE programme. The new product which the company is developing for annuities and bonds will help the company in significantly increasing its market opportunities. Further, the E-VOLVE programme is on a strong delivery pace, reflecting the low-risk approach to delivery for the clients of GBST.

The stock, since its inception, has given an outstanding return of 250%. The stock has yielded a YTD return of 64.52%. If we see the 1H FY2019, the total revenue of the company increased by 3% to $43.879 million. The company made a profit of A$3.693 million, which was up by 48% as compared to its previous corresponding period. The balance sheet of the company appears healthy. There was an increase in net asset base, driven by a growth in the total asset. The total shareholdersâ equity for the period was A$72.261. By the end of 1H FY2019, the company had net cash and cash equivalent of A$9.597 million. 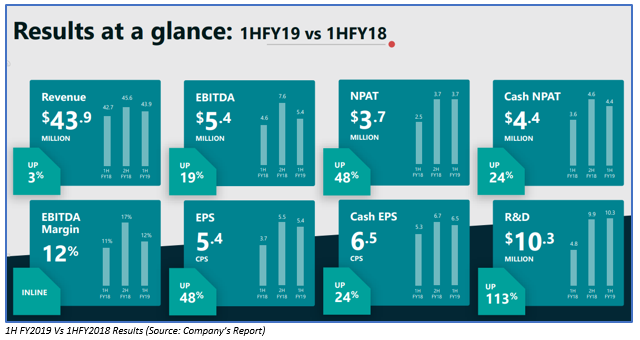 By the end of the trading session on 4 June 2019, the shares of GBT closed at A$2.470, down by 3.137%. The fall in the share price could be probably due to the fall in the index value. However, it is just a phase and based on todayâs announcement along with its strong global presence, and the stock is expected to perform well in the future.

ServTech Global Holdings Ltd (ASX: SVT) is another company from the IT sector which helps in increasing business Profitability by eliminating the time and cost burden of administrative tasks as well as back-office functions by developing and using customized technology.

Through this contract, the company would be able to unlock various new industry sectors, as well as clientele across Europe. FrameS is a real-time SaaS platform solution which helps companies to visualize their designs and creations which includes product development, marketing and communication, learning & development as well as risk management. 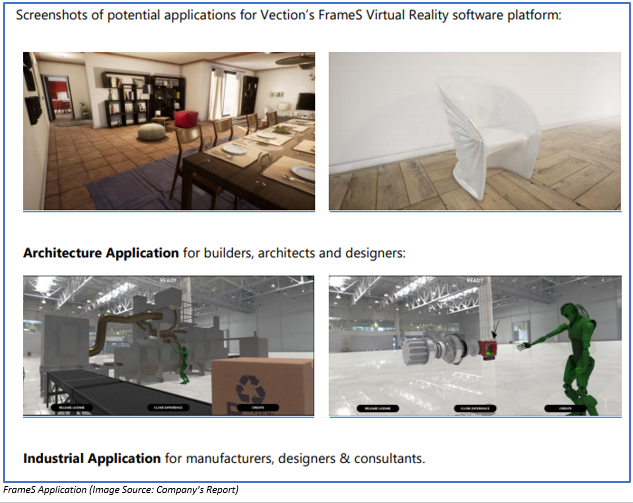 This agreement is also linked to international SaaS subscription strategy of the company, which is set to launch in upcoming months.

On the other hand, initially, Four Bytes (newly established partnership) will be targeting its existing clients with annual turnover above ~â¬400 million.

With this distribution agreement, it can be expected that SVTâs Subsidiary Vection would significantly accelerate its in-market presence with no upfront capital cost expenditure. The agreement would help in unlocking the extensive list of Enterprise and SME clients.

NEXTDC Limited (ASX: NXT) is a company from the IT sector, leading as the independent data centre operator in the Australian region. NXT as a tech entity enables the transformation of business via innovative data center outsourced solutions, services related to connectivity and so forth. 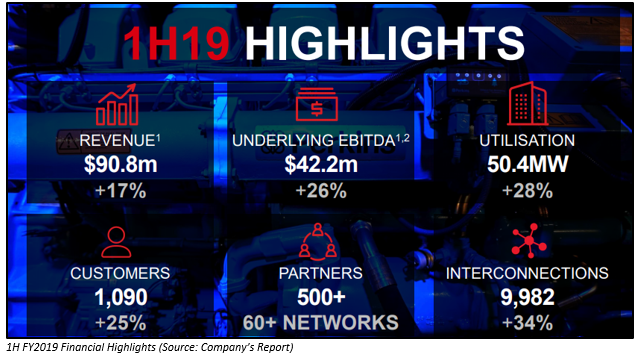 The development activities of the company in the 1H FY2019 includes:

Based on the companyâs 1H FY2019 performance and acquisitions as mentioned above, its utilization levels along with expected new customer contracts in 2H19, the company expects its revenue to be in the range of $180 million to $184 million. The Underlying EBITDA would remain unchanged, and capex will be between $430 million to $470 million.

Recently, on 17 May 2019, the company announced that it had received commitment letters and agreed to a syndicate allocation to refinance its existing A$300 million senior debt facilities.