Australian Dollar Soaring Amidst the Green shoots of Recovery

Covid-19 recovery appears to bring gleaming hopes for the Aussie dollar which strengthened with the burgeoning confidence. AUD/USD which witnessed a record low of 0.5742 on 19 March 2020 has substantially recovered with the growing optimistic sentiments.

The AUD/USD exchange rate was trading at around 0.664 USD on 27 May 2020 (at 12:42 PM AEST). The AUD/USD followed a somewhat sinusoidal movement with the growth trend in May.

The enhancement fuels the direction of the currency exchange rate with the growing investor’s confidence in the Australian economy as the country recommenced its business openings. It has allowed the local currency to gain ~4% against the USD in the past one-month period (27 April 2020- 27 May 2020).

Despite the fuelling tensions between the two most powerful economies, the US and China, the investors showed the positive sentiments in the international trade and country’s economic outlook, sending the bullish trends in AUD/USD. The rising tensions and the dwindling bilateral relationships were majorly offset by the other affirmative trends that dominated the investor’s psychology.

Let us look at the factors that are positively steering the Aussie dollar movement.

The growing positive outlook for the Australian economy with the restart in the business operations has been mainly driving the stock movements. S&P/ ASX 200 rallied by around 3% on 26 May 2020 to close at 5780 points. The positive stock momentum and AUD strength have been driven by the budding chances of revival of the economy. Australian Prime Minister, Scott Morrison has indicated the Economic Reopening by July 2020.

Australia has implemented the phased reopening plan with the states being provided the discretion to implement the opening as per the Covid-19 conditions in the state. Many Australian states have kickstarted most of the business operations giving a substantial boost to the economic prospects.

The plan to further welcome the overseas student from July and the recommencement of the ‘Trans-Tasman’ Trade has also blossomed the economic aspirations of the island nation.

The simultaneous rise in the market and the currency can also be aligned by the strong demand for the Australian dollar by foreign institutional investors. Foreign Investment Review Board (FIRB) Annual Report indicated that the Chinese investments in Australia dwindled by around 50% in the year to end of June 2019. The FIRB Chairman, David Irvine, however, indicated that the investments from Hongkong had surged significantly to $9.3 Billion in 2018-19.

Exports from Australia during April fell by 12% to $31,443 million from the record-high figure in March 2020. Despite the fall, the export remained historically high. The period primarily coincided with the strict lockdown restrictions that saw dwindling demand and curb on the various activities.

Metalliferous Ores, Coal and Petroleum primarily reported low trade as the international construction was temporarily shut and the travel bans were imposed. However, the growing recommencement in the construction activities and waning of the travel restrictions has reinforced the investor’s trust in the Australian currency.

China, which remains the largest exporter for Australia, has resumed its construction activities towards infrastructure development. Spain has announced the cease the 14-day quarantine of the international visitors since July. While the UK would see its car showrooms opening from 1 June 2020, Germany mulls on opening the international European Union Border from June.

ALSO READ: Are there Any Signs of Optimism in Global Markets?

The positive signs are demonstrated in the travel and transportation industry in the European countries, along with the construction activities in China. It would likely to spur the Australian dollar demand resultant from the enhancement in petroleum, coal and ores export which remained low during April. 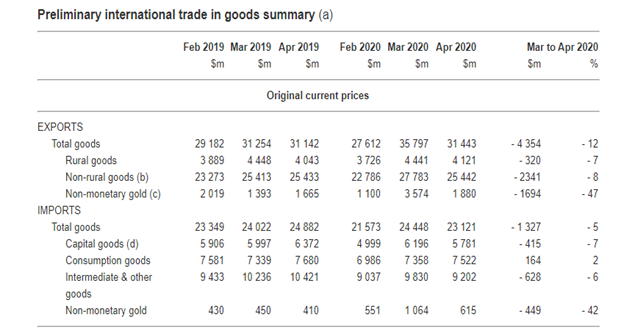 The positive momentum in the Aussie currency market was also stimulated by the growth prospects for the anti-coronavirus vaccine. The investor confidence in the Australian recovery, which is quite ahead of the other nations further grew with the progress in the discovery and development of the vaccines and drugs.

Many of the potential vaccines are in the pipeline for starting the clinical tests for the Covid-19 infection. Moderna has begun conducting the clinical trials of the potential vaccine which the company highlights can be available by fall. However, infections were reported in some subjects treated to Moderna vaccine. Another us Biotech company, Novavax has also started its first human study.

One of the largest pharmaceuticals, Merck & Co., also joined the bandwagon of the countries that are actively seeking potential cure or prevention from the Covid-19 infection. Merck has made a deal and would be working on two vaccines and one drug for the virus.

The government plans for the monetary easing would, therefore, is likely to be mostly dependent on the quantitative easing and not on the negative interest rates.

The Central Banks Governor Philip Lowe, however, indicated that the board plans to keep the interest rate static until the progress towards 100% unemployment is made and the inflation sustainability within “2-3% target band” is ensured. Furthermore, he also indicated the potential for strong economic recovery if the coronavirus is contained.

Australian dollar driven by the growth prospects in both the domestic and international landscape has been garnering positive hopes. Meanwhile, it would be noteworthy to analyse the pandemic situation and the chances of the second wave of infection that could uproot the budding optimism. However, for now, the situation for the investors and the Australian exporters looks complacent as dollar reinforces strong position in the world market.