Long term investing is more concerned with earnings and profit growth, and in short-term, the markets react on emotions, forced selling and geopolitical uncertainties nowadays. An investor with a long-term approach should emphasize more on company specific fundamentals and the potential effect on those fundamentals of various macro and micro-economic factors. 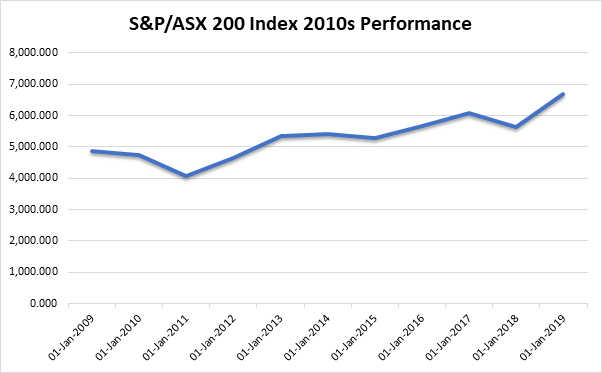 This equates to a rise of approximately 37 per cent. Meanwhile, the last year of the decade turned out to be the best one with returns of just over 18 per cent, and this was despite the benchmark index tanking over hundreds of points on the last trading day of the decade. 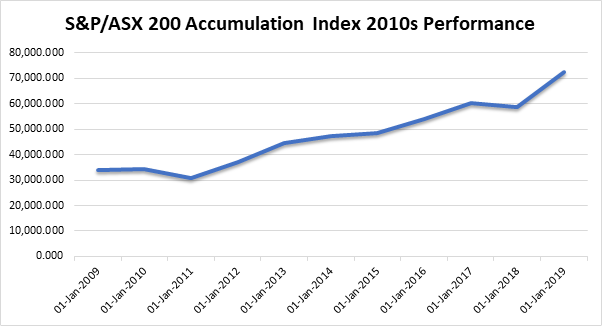 In the second half of the year, the capital raising activity was mainly concerned in the small and mid-cap space, which was seeking to fund new growth opportunities. And, the benchmark index recorded a gain of 26 per cent in 2009.

Moreover, when the new decade was on the horizon, the markets were recovering from the global financial crisis, thus posting a gain of 26 per cent. Back then, market experts noted that 75 per cent of the stocks finished the year in the positive territory.

Some factors that are dependent on overall economic situation of the country are likely to have impacts on a company’s business, and in turn, share prices. These factors include interest rates, commodity prices, exchange rates and economic growth.

A drop of over 25 per cent from the high of $1.1/ USD has been favourable for companies that are primarily exporting goods outside Australia. And, these companies also include natural resource players.

Declining interest rates over the decade had helped companies to reduce interest payments on the debts, while providing significant room for cheap capital, consider the borrower quality.

The effects of lower interest rates are not only evident in the company’s business but the overall economy as well. And, as interest rates were lowered, the Australian credit growth was drastic in 2016.

However, credit growth has come down from the highest levels. Despite additional interest rate cuts, households are looking to pay-off the existing debt while bank lending standards have solidified further, that are discouraging additional borrowing.

In 2016, the energy sell-off that was triggered by a continued fall in the crude prices had jittered many investors. And, this could be the moment of the decade as the American oil output was set to create problems for the traditional oil-rich nations.

In a broader sense, the crude-crash had significant outcomes, including the OPEC coming together to cut supply in a bid to restore price, and it also raised concerns over the Middle Eastern Kingdoms to diversify their oil-focused economies.

These jitters were felt by almost every major energy company that was engaged in the oil and gas industry, and the whole market lost substantial wealth. At this backdrop, the aviation sector witnessed a steady rise, and it was an inflection point for the industry.

The evolution of Qantas Airways Limited (ASX: QAN) is reminiscent of the favourable outcomes of the crude crash, and the stock has delivered a price return of +137.58 per cent in the past ten-year period to 6 January 2020 while in the past five years, the price return on QAN has been +167.62 per cent.

However, the rise of Qantas was complemented with the fall of ASX-listed energy players, which had eroded substantial wealth during the decade. Over the decade to 6 January 2020, Origin Energy Limited (ASX: ORG) was down 42.09 per cent, Woodside Petroleum Ltd (ASX: WPL) was down 25.01 per cent, and Santos Limited (ASX: STO) was down 30.08 per cent.

Moments to Forget from the 2010s

Looking into large names, the decade witnessed the fall of Onesteel/Arrium that went to administrators in 2016, and equity investors in the company lost their whole capital. This was the result of mounting debt and losses.

Share Price of QBE Insurance Group Limited (ASX: QBE) is down over 45 per cent over the past decade to 6 January 2019 in price terms. The acquisitions, which positioned QBE as one of the largest insurers globally, came at the expense of large profit downgrades, and later the loss-making businesses were divested.

In addition, the Haynes Royal Commission is still depicting its ramifications, while the large domestic financial services industry is undergoing a drastic change ethically, socially and professionally.

The jitters of Royal Commission resulted in heavy provisions by the wealth management firms, financial advisory, big-four banks, and mostly everyone was on target. The rage of class actions has started to pick-up, and there are many legislative changes required, considering the recommendations.

The fee-for-no-service scandals had impacted many high-profile companies on ASX, including AMP. Over the decade to 3 January 2020, the share price of AMP Limited (ASX: AMP) is down by around 70 per cent.

Shining Stars of the Decade

Investment management company, Magellan Financial Group had a market capitalization of approximately $10.77 billion. MFG has delivered a price return of 7,058.6 per cent over the decade to 6 January 2020.

Presently, the company is among the largest asset managers in the country with an offering of domestic and international funds.

Print Circuit Board designer, Altium Limited is one of the hottest stocks in the Information Technology sector in the country. Over the decade to 6 January 2020, ALU has delivered a price return of 12,850.94%.

Linguistic services company, Appen is also one of the most tracked companies in the Information Technology sector in the country. Since listing, APX has delivered a return of 4,120.95 per cent.

Internet lottery and gaming company, Jumbo Interactive has been paying growing dividends over the past few years. Over the decade to 6 January 2020, JIN has recorded a return of +3,346.19%.

Biotechnology giant, CSL Limited has delivered solid price gains over the decade, in addition to the dividends. The Stock of the company has a return of 764% over the decade to 3 January 2020.

It would be quite tough for the markets to deliver the returns that could surpass the levels in the previous year. And, the market should expect modest returns in the year 2020. The geopolitical risks have started to knock at the doors with the assassination of an Iraqi Military General by the US.

In 2019, the commodity prices, interest-rate cuts and finally a de-escalation in the US-China trade talks had helped the markets to deliver a decent return. And, the victory of Coalition government against the Labors was an inflection point for investors, as the Labor party’s proposal to phase out franking credits would have been draconian.

Additional fiscal support could be expected by the Commonwealth Government. In 2019, the government had introduced tax cuts and infrastructure package, and there is more room as the government has steady public finances.

Investors are increasingly skewed towards the retail sector, but the lag effect of interest rate cuts is likely to be seen in the near-term. And, investors should consider looking at the richly valued sectors that had outperformed the market in 2019.