A Look At The Four High Dividend Yield Stocks

Income stocks are generally high dividend paying stocks and are defensive in nature. There are certain criteria for picking up high dividend stocks. The easy way is by looking at the dividend yield of the stocks. Below are some examples of high dividend-yield stocks.

About the Company: Sydney Airport (ASX: SYD) is Australiaâs most important infrastructure which connects to more than 90 destinations around the world. The market capitalisation of the company stood at $18.41 billion as on 20th September 2019.

Highlights of the month-

1H19 Results Highlights: The total number of passengers who passed through Sydney Airport in first half of 2019 was 21.6 million. International passengers increased by 1.9%, however overall passengers were down by 0.2% due to decrease in domestic passengers by 1.5%. 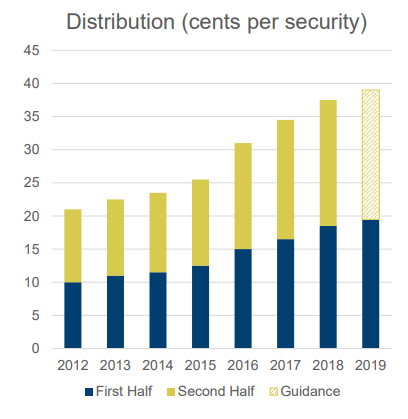 Stock Performance: On 20th September 2019, SYD stock closed at A$8.010, moving down by 1.718 percent from the prior close. In the last six months period, the stock has generated a positive return of 10.58 percent. Currently, the stock is trading at a PE multiple of 46.150X.

About the company: Woodside Petroleum Limited (ASX: WPL) is the founder of LNG industry in Australia. The company has a worldwide portfolio and is also recognised for its world-class competence as a combined upstream supplier of energy. The market capitalisation of the company stood at $30.12 billion as on 20th September 2019.

The production from this project makes an important contribution to Woodsideâs estimated annual production which is of approximately 100 MMboe in 2020.

Performance in 1H19: In 1H19 company reported a strong production performance from the NWS Project and Wheatstone. Woodsideâs base business generated strong cash flows and kept the margins sustainable. The company reported the net profit after tax of $419 million, which was lower compared to the corresponding prior-year period, due to the impact of the planned maintenance at Pluto LNG, Tropical Cyclone Veronica and the Ngujima-Yin FPSO facility being offline. 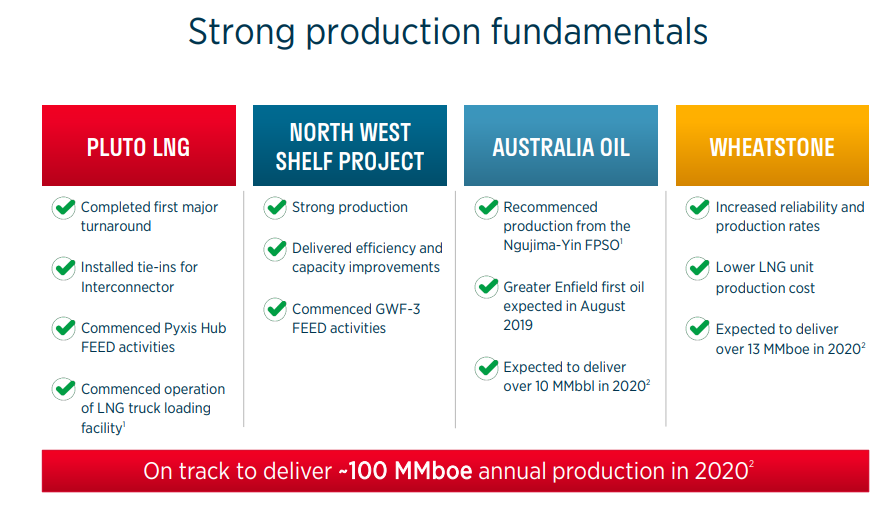 Dividends: The company has declared an interim dividend of 36 US cents per share and have also reactivated the dividend reinvestment plan. The price for each share issued through the DRP for the interim dividend to be paid is AU$31.3447.

About the Company: New Hope Corporation Limited (ASX: NHC) is a diversified energy company which has interests in port operation, exploration, coal mining, agriculture, conventional oil, investment and innovative technology. The market capitalisation of the company stood at $2.01 billion as on 20th September 2019.

FY19 Financial Highlights: The company reported a revenue of $1,306 million which was up by 21% as compared to previous year. This strong revenue growth was seen due to strong export thermal coal prices during the period. It reported a profit before tax and non-regular items of $384.3 million up by 3% due to increase in sales tonnage along with a combination of strong coal prices.

After the non-regular items, company reported net profit after tax of $210.7 million which was up by 41% from the previous year. During FY19, the company generated a strong cash operating surplus of $509.8 million, an increase of 18% on the 2018 result of $433.9 million.

Key Highlights of the Year:

Companyâs update on its Coal Resources and Coal Reserves-

Dividends: The company has declared a final dividend of 9 cents per share. This is fully franked and is payable on November 5, 2019 to shareholders which are registered as on October 22, 2019. The annual dividend yield of the company is 7.02%.

Stock Performance: On 20th September 2019, NHC stock closed at A$2.350, moving down by 2.893 percent from the prior close. In the last six months period, the stock has generated a negative return of 37.79 percent. Currently, the stock is trading at a PE multiple of 9.550X.

About the Company: Aventus group (ASX: AVN) is Australiaâs top, fully integrated manager and developer of large format retail centres. The market capitalisation of the company stood at $1.49 billion as on 20th September 2019. 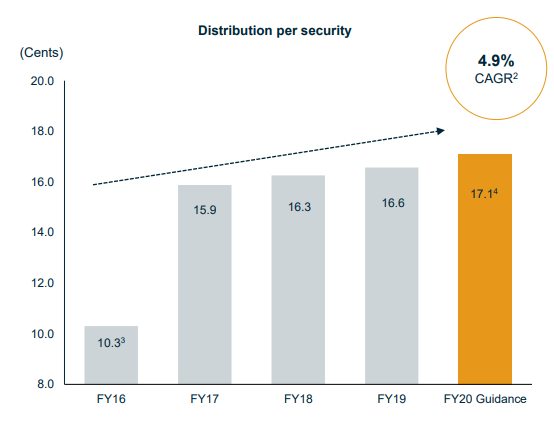 CLICK HERE FOR YOUR FREE REPORT!
Tags:
Dividend Sydney Airport (ASX: SYD) Woodside Petroleum Limited (ASX: WPL) ASX: AVN ASX: NHC
All pictures are copyright to their respective owner(s).Kalkinemedia.com does not claim ownership of any of the pictures displayed on this website unless stated otherwise. Some of the images used on this website are taken from the web and are believed to be in public domain. We have used reasonable efforts to accredit the source (public domain/CC0 status) to where it was found and indicated it below the image.