UK’s consumer confidence is being heavily impacted by the rising anxiety associated with the surging cost of living. The GfK’s Consumer Confidence Barometer fell five points to minus 13 in September 2021, the lowest level in twelve months. Moreover, all survey measures, including personal finances, dropped to minus four, and the general economic situation declined 10 points to minus 16 over the last 12 months.

The consumer confidence index registered a three-point drop to minus six in the major purchase index, which indicates consumer confidence towards big-ticket purchases. This is emerging as a cause of concern for retailers with the holiday season just around the corner. 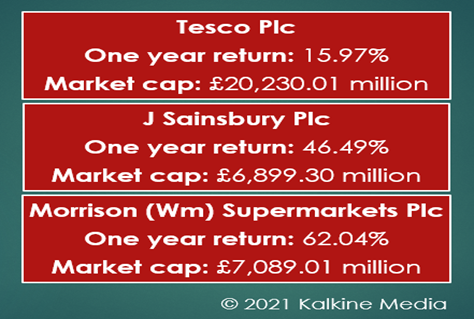 Tesco is a UK-based multinational retailer of groceries and general merchandise. It operates in the UK through 3,400 stores. Recently, the company announced the closure of pumps and rationing of fuel due to the shortage of HGV drivers and inconsistencies in the supply chain. Tesco’s shares traded at GBX 259.55, down by 0.80% at the day’s close on Thursday 23 September 2021.

For the quarter ended 29 May 2021, Tesco’s retail sales totalled £13,362 million, and total fuel sales were £1,440 million. The company recorded 1.3 million online orders per week during the quarter.

Sainsbury is a leading food retailer and supermarket chain in the UK. The company registered continued growth in on-demand sales. Its Chop Chop, a 60-minute delivery service, is currently available across 49 stores, and Deliveroo and Uber Eats are now in 230 stores, representing an increase of 42 stores during the quarter.

Morrison is a UK-based supermarket chain. The company also operates online supermarkets. Recently, Morrisons rolled out the UK’s first ‘zero waste’ stores, which will be fully operational by 2025. Its shares traded flat at GBX 291.10 at the day’s close on Thursday 23 September 2021.