The shares of Nikola Corporation jumped on NASDAQ (NKLA) approximately 10 per cent on 21 October to $22.24 after an executive from General Motors gave a statement that the Detroit-based automobile company still saw potential in a partnership with the startup that designs and manufactures electric and hydrogen trucks.

During a session with analysts, GM President Mark Reuss said that the automaker is still trying to reach a deal with Nikola. Reuss said that the deal offered a substantially big opportunity for GM to bring the fuel cell technology to market in Class 7 and 8 commercial trucks.

Besides, Reuss told in a media interview that he was excited with the new deal with Nikola. It is to be noted that the fuel cell technology was developed by GM and Honda Motor Co Ltd. 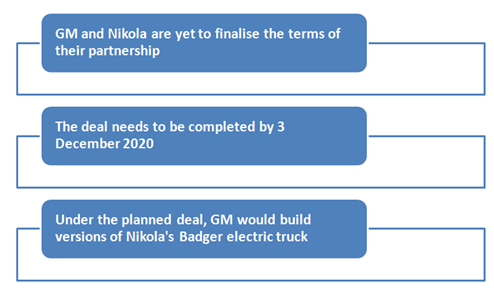 It is to be noted that GM and Nikola are yet to finalise the required terms of their partnership. Earlier, the agreement was set to close by the end of September. However, the negotiations got extended. The next deadline has been set for 3 December.

Also read: How is EV battle going; Is Volkswagen catching up with Tesla (NASDAQ:TSLA)?

Under the new partnership, GM would build versions of Nikola's Badger electric truck, considered to be a potential competitor to Tesla’s Cybertruck and provide fuel cells to Nikola's heavy-duty trucks.  In return, GM would get $2 billion in Nikola stock. Though company sources have said that GM is negotiating for a larger stake in Nikola.

GM and Nikola are trying to reach an agreement under which Nikola would pay GM to build its Badger electric pickup. Earlier GM and Nikola had charted out a deal that would provide GM emissions credits from the sale of the Nikola Badger. Nikola would additionally make a payment of $750 million to fund the tooling for production. These credits could potentially facilitate GM to keep selling its gasoline-burning pickup trucks and sport utility vehicles. Both of these are considered to be highly profitable for the automaker.

Earlier this month, Nikola CEO Mark Russell said that the company had a base plan to move ahead without GM, if the deal was finalised as per their terms and conditions. Russel said that the lack of agreement with GM could compel Nikola to stop thinking about an initiative to build its Badger electric truck.

Sources said that GM is expecting that it would be able to sell these two vehicles without any regulatory penalties. The agreement announced last month included plans for GM to secure around 11 per cent stake in Nikola, which is worth $2 billion at that time.

Just after the deal was announced another development worried the investors. A Hindenburg Research claimed that Nikola was involved in a fraudulent deal. The report claimed that Nikola’s founder and then Executive Chairman Trevor Milton had presented false claims about the electric truck manufacturer’s proprietary technology. A Securities and Exchange Commission (SEC) investigation launched into the claims. Nikola though have denied the allegations.