Water utilities in the United Kingdom, such as the Severn Trent and United Utilities, reported positive half-year results driven by rising business usage with the easing of lockdown restrictions and workforce heading back to offices.

Another major water company – Pennon Group, is scheduled to announce its half-yearly results by the end of this month. However, uncertainty in the business environment continues to loom as government support schemes such as furlough will end, which may increase unemployment and impact the customers’ ability to pay.

The country’s water regulator – Ofwat, has also launched an investigation in relation to water pollution and sewage treatment.

Below is a detailed review of the investment opportunity in 3 FTSE water stocks – Pennon, Severn Trent and United Utilities. 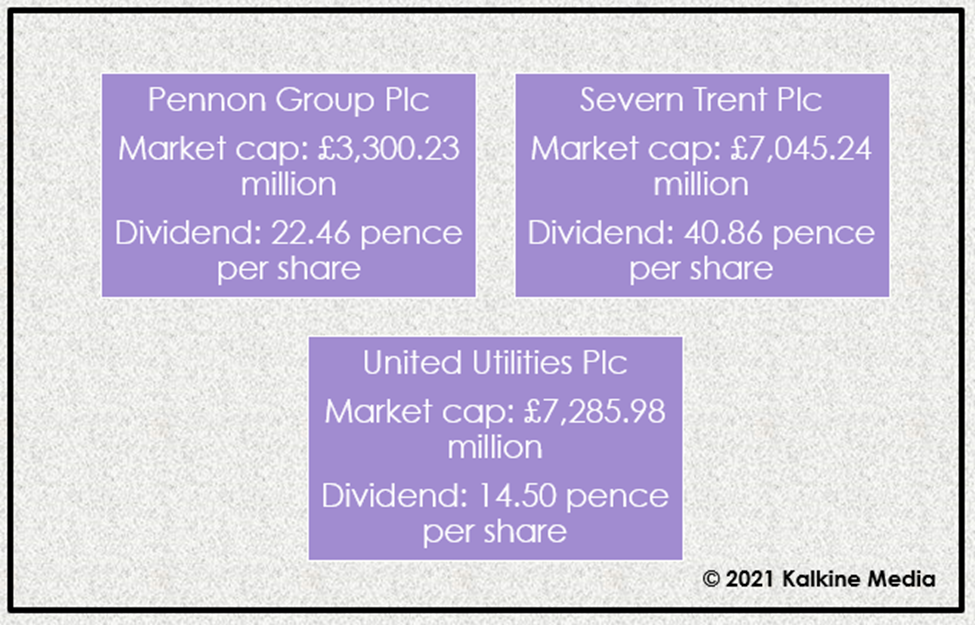 FTSE 250 listed Pennon Group operates as an environmental utility firm that owns South West Water Limited. In June this year, the utility giant announced the takeover of the water company Bristol Water for £814 million. Last month, Competition & Markets Authority (CMA) conducted a merger inquiry into Pennon's takeover of Bristol Water. Back in June, the CMA imposed an initial enforcement order on Pennon’s potential deal with Bristol Water to check if the deal would impact market competition.

For 2020/21, the Pennon Group’s board announced a final dividend of 22.46 pence per share to shareholders.

Severn Trent is a water company listed on the FTSE 100 Index of the London Stock Exchange (LSE). Just after Britain government’s launch of a major investigation into sewage treatment, the water utility company announced the implementation of actions to improve the quality of rivers by 16 years.

Severn Trent’s turnover stood at £958 million for the six months ended 30 September 2021, representing an increase of £71 million or 8% year on year, driven by the recovery in non-household consumption and lifting of lockdown restrictions. Its group profit before taxes was up by 13.8% year-on-year to £256 million during the period.

For the half-year ended 30 September 2021, Severn Trent announced an interim dividend of 40.86 pence per share to shareholders.

United Utilities Group is a water and water services company with operations focused on the North West of England. For H1 2021, the company reported revenue of £932.3 million, up from the previous year’s £894.4 million. Its underlying operating profit stood at £332.8 million for the period.

For the six months ended 30 September 2021, United Utilities Group announced an interim dividend of 14.50 pence per ordinary share to shareholders, up from the previous year’s 14.41 pence.

Which London-Listed Advertising Stocks To Explore?