The Bank of England (BoE) will conduct its next policy meeting on 16 December 2021. As per the latest survey of economists, the BoE could be the first major central bank amongst developed economies to hike interest rates.

The British economy is facing stagflation with sluggish economic growth and rising inflation. Gross Domestic Product (GDP) in the UK grew at 1.3% in the third quarter of 2021, while price rise or inflation rate was at 3.1% in September 2021.

Rising inflation predictions in upcoming quarters by many economists might push the central bank to hike interest rates, which in turn might prove to be beneficial for the banking sector as lenders will see improvement in net interest income. To harness the trend of interest rate hikes, investors can consider adding banking stocks like Lloyds Banking Group, Barclays Plc, NatWest Group to their portfolio. 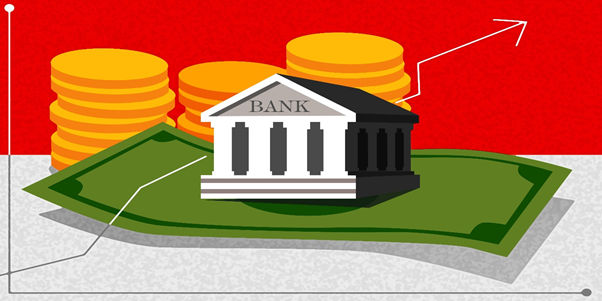 Let us explore the above-mentioned FTSE listed banking stocks and their investment prospects:

It is one of the largest financial service providers in the UK and serves close to 25 million customers through many well-known banking brands. In the nine months to 30 September 2021, the lender reported £11,072 million in total revenue, while its net interest income was at £8,249 million. The bank has done total gross lending of £424,619 million, which includes retail and cooperate clients as of 30 September 2021.

The company has diversified operations in over 55 countries offering various banking and financial services to its clients. The lender reported revenue of £16,780 million for the nine months ended 30 September 2021. Its net interest income was at £5,843 million, while investment banking fees, commission and other income were at £10,937 million. The bank’s total gross exposure towards loans and advances is at £359,207 million as of 30 September 2021

The company provides personal banking and other financial products to its retail and institutional clients. The company reported a total income of £8,093 million, while its net interest income was £5,870 million for the nine months to 30 September 2021. The bank has done total gross lending of £374,000 million as of 30 September 2021.