Gold vs. cryptocurrency: Which investment can help you right now

Gold has been valuable for over thousands of years and has been used as a medium of exchange before money was introduced. It has been used for portfolio diversification, beating inflation, hedging against excessive central bank money-printing, and for balancing losses from the stock market as it is uncorrelated to stocks and bonds. It is considered a stable investment as compared to the extremely volatile cryptocurrency assets with no physical backing of value. But both gold as well as cryptocurrencies have merits as well as demerits.

Unlike fiat currencies being pegged to stable assets, cryptocurrencies have no asset backing. They are so volatile that their value gets significantly impacted even by a single tweet! Gold is a relatively safer investment option as its value is disrupted by negligible factors.

ALSO READ: Why you shouldn’t have too much gold in your portfolio

Earlier, gold was considered as the sole safe-haven asset. But with emergence of new alternatives, such as cryptocurrency, the old-school concept of safe-haven assets has been challenged. So, what should you invest in? Let’s briefly compare the two investments based on the following factors. 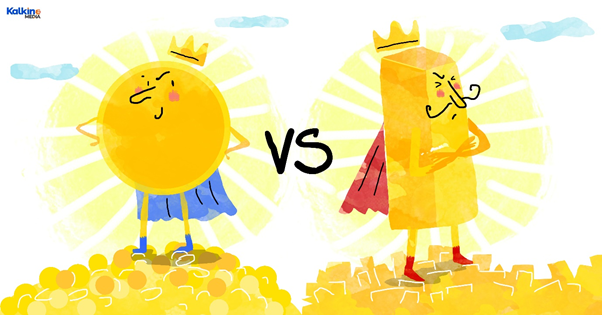 A well-defined system for weighing, tracking, as well as trading of gold is in place across the globe. Corrupting the metal is quite difficult. It is also very difficult to steal gold or pass on fake gold. Likewise, Bitcoin and other cryptocurrencies are also very difficult to corrupt, as they use the blockchain technology. The decentralised system, which works on complicated algorithms and encryptions that can’t be decoded easily, helps in maintaining the transparency and security in the crypto market. But the infrastructure to ensure its safety and security isn’t 100% efficient, a notable example for the same being the Mt. Gox disaster, which was a Tokyo-based bitcoin exchange hacked to steal US $460 million from its online coffers. Thus, gold ranks above cryptocurrency considering these factors.

ALSO READ: Gold vs Bitcoin: Can Cryptocurrency be the next ‘Safe Haven’

Gold can’t be manufactured, and no matter how much its demand is, its supply remains disproportionately less. Gold must be mined and processed, and it is not as simple as companies issuing new shares, or banks printing currency. Gold holds high market value as it is a rare resource, but it isn’t known how much gold is present on earth, and when will all of it be mined. There are even speculations that gold may be mined from asteroids and some companies are preparing to do it in future. Like gold, some cryptocurrencies like bitcoin, also known as “digital gold”, are also rare. The halving of Bitcoin's mining reward, which cuts the bitcoin inflation rate as well as the rate at which new bitcoins enter circulation in half, ensures that all 21 million bitcoin will be out in circulation by the year 2140. This helps in controlling the value and supply of bitcoin. But on the other hand, cryptocurrencies like Ethereum have a quite high circulating supply.

Gold is considered as valuable versus other metals as it is relatively scarce, and therefore, has had been a status symbol for ages. It is durable and acts as a long-term store of value. It is difficult to acquire and has more value than others like aluminum, which have lost value due to easier extraction. Gold is used for jewellery and for investment purpose, but it is also used by central banks for hedging, and also by the technology industry, as it is an electrical conductor. Like gold, cryptocurrencies also have tremendous baseline value. The multibillion-dollar crypto market is an attractive platform for investors for several reasons. It provides an alternative to the age-old system of money transaction, and uses a decentralised system based on blockchain technology, which falls outside the control of central authorities. People who don’t have access to traditional banks can send crypto assets across the globe, even possibly without paying any fee.

Both gold and cryptocurrencies are considered liquid assets as they can be easily exchanged for fiat money. But cryptocurrencies are way more volatile than gold, as they are more impacted by even small changes in the market. In the past few year, cryptocurrencies like Tether, which is among the so-called “stablecoins” have come up to tackle the volatility issue. Tether is pegged to the US dollar in a way similar to gold before the 1970s.

Can gold fight against the cryptocurrency market’s extreme volatility?

The blockchain technology used in the crypto market will ensure transparency, security, as well as liquidity of the cryptocurrencies. The cherry on the cake regarding gold-backed cryptocurrency is that it will be a much more stable investment due to minimal fluctuations in the price of gold. A mix of both stability and accessibility can be achieved in case of gold-backed cryptocurrency as the value of gold can be preserved even during market failures and recession, which would work in combination with cryptocurrencies to provide a much safer investment option.

ALSO READ: Can ether prices rise on the back of Ethereum’s London upgrade?