Delta variant cases in the UK is up by 74% compared to the previous week. Some experts have opined that the major reason for the sudden spike in cases is people gatherings at the ongoing EURO championship as most of the matches in the last stages of tournaments are conducted in the UK, and close to 60,000 fans are allowed to attend matches. Besides, many public gatherings are taking place outside the stadium and at pubs and bars to watch matches.

The UK government had announced to lift the last phase of coronavirus restriction in the next two weeks despite the daily surge in cases of delta variants. After restrictions get lifted, it would not be mandatory for people to wear masks and end of social distancing norms. 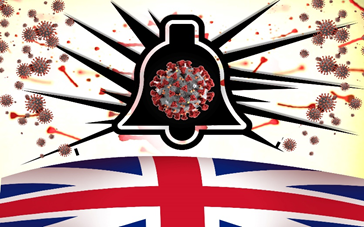 However, the rise in rapid cases led to fear of new restrictions and lockdown in the UK. Let us explore few stocks which are sensitive to lockdown and could get impacted if there is any change in government stance:

The company operates the passenger airlines and cargo business. The IAG Group was formed in 2011 after the merger of British Airways and Iberia, Spain. Since then, the company has expanded its operations by purchasing other airlines. Currently, it operates a fleet of 533 aircraft flying to 279 destinations.

Covid-19 has adversely impacted the airlines’ sector, and its cascading impact is visible with job loss and revenue loss for the companies. As per the estimates, globally, the aviation sector suffered a revenue loss of USD 371 billion, and the passenger traffic is down by 2.6 billion.

IAG Group Plc registered a net loss of £5949.72 million in 2020, and the revenue was down to £6708 million (FY19 revenue: £21920 million). In the first quarter of 2021, the passenger traffic showed some sign of recovery, but a sudden rise in Delta variant cases could derail the company’s recovery plans.

The company operates cruise line services and covers almost all major destinations. The company sells its services through a network of travel agents and tour operators and has a fleet of over 87 ships.

The company was worst impacted as cruise lines were the first to close down their services and the last ones to open operations. As a result, Carnival Plc suffered USD 10.2 billion in losses in 2020 and survived most of the year by taking new loans and selling off ships and shares. The company has raised close to USD 19 billion in debt and equity since March 2020.

The company recently opened its cruise services in the US and European destinations but continues to face the uncertainty of lockdown and virus spread.

FTSE 100 listed company owns and manages hotels business in the Americas, Europe, Asia, the Middle East. It operates in both luxury and mid-sized economy hotel segments. The company has a portfolio of 5964 hotels in over 100 countries.

The company suffered a revenue decline of over 50% due to lockdown restrictions and posted a net loss during the year 2020. In the first quarter of 2021, the company reported improvement in occupancy and demand in few geographic locations but still, full recovery will take some time, and if Delta cases continue to rise, it will put the company’s future plan in jeopardy.