Open Orphan Plc is a United Kingdom domiciled rare and orphan drug consulting services providing company. Focused primarily on Europe, the company has plans to promote a number of orphan drug providing businesses. The company has two data driven digital platforms and one Genomic Health Data Platform, which is in the process of building a rare disease database and a Virtual Rep platform which would ultimately help pharmaceutical companies to engage with opinion leaders and physicians. The company is attempting to make headways in one of the fastest growing segments within the global pharmaceutical industry, focusing on under-supplied treatment for life threatening or similarly serious ailments and rare disorders.

The company’s shares are listed on the AIM segment of the London Stock Exchange where they trade with the ticker name ORPH.

The company on 25 September 2019 published the interim financial results for the six-month period ended 30 June 2019.

During the first half of 2019 the company witnessed a transformative reverse takeover of Venn Life Sciences Holdings Plc by one of the company’s arm Open Orphan DAC. This gives the company the ability to target the fragmented orphan drug services market of Europe. As part of the reverse takeover process the company successfully placed and raised £4.5 million in June 2019 to bring fresh capital to the business and fuel its growth strategy. 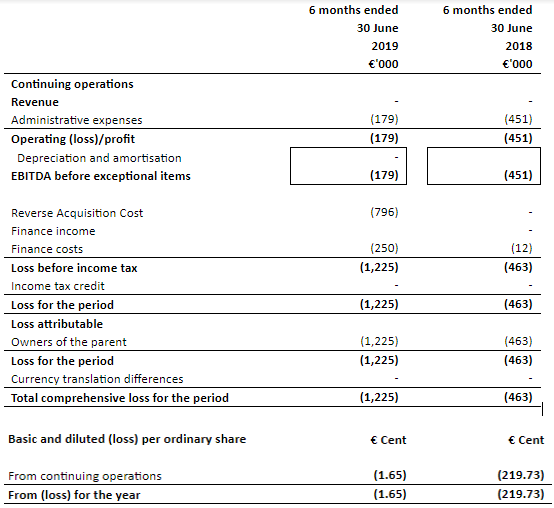 The company has set out its path ahead with a clear strategy of focusing on the fast-growing market for orphan drugs. The management of the company and its Board have a good performance record and are well positioned to generate significant shareholder value. The company looks forward to updating its shareholders and prospective investors on its pipeline of acquisitions.

Ceres Power Holdings Plc is a United Kingdom domiciled fuel cell technology company. The company claims to be a pioneer in cost effective yet advanced fuel cell technology systems, that saves on operating costs, increase equipment efficiency and improve energy security. The company’s novel patented technology is capable of producing electricity from a wide spectrum of fuel types such as natural gas and hydrogen thereby enabling a transition from low to zero carbon emission power production at high efficiency. The company offers its partners the opportunity to build power systems and products using its advanced technology and proprietary information, as well as license manufacture of SteelCell® unit in volumes.

The company’s shares are listed on the AIM segment of the London Stock Exchange where they trade with the ticker name CWR.

The company on 02 October 2019 published the full year financial results for the period ended 30 June 2019.

The company has a set out objective of meeting the needs and expectations of its licensees, for whom the derivation of operational excellence, value creation and prompt delivery are keys to their success and growth for this company.  Other than that, the company is mindful of the challenges and opportunities it faces and in the process is not only refining its technology but also adapting it for further and future applications.

The company is a pioneer in this industry to be able to set the pace and standards for SOFC technology and looks ahead to be able to extend its technological prowess to a widening portfolio of global partners and applications.

Ariana Resources Plc is a United Kingdom domiciled mineral exploration and development company with mining operations directed towards epithermal gold-silver and Porphyry copper-gold mines in Turkey, the largest gold producer in Europe. The company is currently working on a number of prospective licenses originally selected on the basis of its proprietary geological and remote-sensing information repository, these mines now contain approximately 1.6 million ounces of gold and other metals. Ariana's objective is to cost-effectively add value to its projects through focused exploration and strong collaborations.

The shares of the company are listed on the AIM segment of the London Stock Exchange where they trade with the ticker name AAU.

The company on 30 September 2019 came out with its interim financial results for the six-month period ended 30 June 2019. 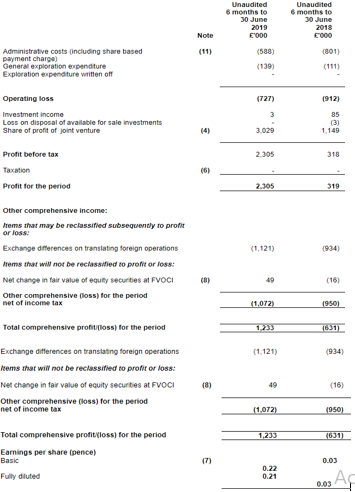 The Joint Venture operations of the company continue to go from strength to strength and its successful partnership with Proccea Construction Co. testifies that similarly structured partnerships are a strategy for future success.  In particular, the company remains in discussions with a number of others on the development of the Salinbas Gold Project and it looks forward to providing further updates to investors once it has selected a suitable partner.

The company strives to continue to deliver on this year's exceptional progress, through continued production and exploration success, as well as seeking new development opportunities within and outside of Turkey.  As previously noted, the company is in the process of diversifying its strategy to include another project in a country other than Turkey.  In this regard the company hopes to make an announcement in near future concerning its interests in an exploration and development project in Cyprus, at which it has been conducting due diligence work during the past two years.

The company would like to maintain its production guidance for 2019 at 25,000 oz (gross to the JV) with the operations during the third quarter continuing to perform fully in line with expectations.  The company shall update on major developments and milestones achieved during the year as it progresses, into 2020.