London and European markets jumped for a consecutive second day and the FTSE-100 was quoting at 6,251.03 up by 0.13 per cent slightly higher than the previous day close (as on 17th June 2020, before the market close at 2:20 PM GMT+1). Some of the compelling events which were trending in today’s trading session:

As the stores across High Streets re-opened, we will discuss two retail stocks - Pendragon PLC (LON: PDG) and Card Factory PLC (LON: CARD). On 17th June 2020 (before the market close at 2:20 PM GMT+1), PDG stock remained flat, and CARD stock was up by 3.95 per cent from their previous day close. Let us walk through their financial and operational performance.

Pendragon PLC (LON: PDG) is a leading automotive retailer, which runs various brands. It is also engaged in Software and Leasing business. In the automotive retail sector, the Company operates in used cars, new cars and after-sales segments. 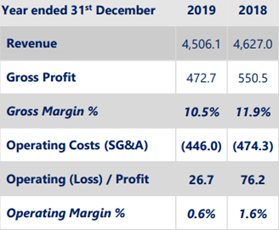 Pendragon will continue to nurture its digital car sales space for the customers who want to purchase cars online. It has currently halted all the capital expenditure, and the future investments will be reviewed once business resumes to normal.

Card Factory PLC (LON: CARD) – The Company is a retailer of greeting cards, dressings and gifts. It has two operating segments, Card Factory and Getting Personal. It runs a total of 1,022 stores in the UK and the Republic of Ireland.

Operational Update – as reported on 6th May 2020

The Company abstained from providing financial guidance for FY21. It established some vital partnership with retail partners in the UK and abroad. It also believes that with a shift in the consumer demand, the subdued demand for Christmas card giving is likely to be offset by the market in new and non-standard occasions.