In the previous general elections held in the year 2017, the conservative party failed to win a majority but came into the power with the support of the Democratic Unionist Party (DUP). This was followed by a long debate as well as a deadlock over the Brexit scenario, as the then Prime Minister Theresa May, faced a lot of flak from allies and opposition alike, over  not being able to obtain the right deal in the negotiations held with the representatives of the European Union. This led to the resignation of Theresa May, which was quickly followed by the appointment of Boris Johnson. In the first two months of his reign, the new government faced similar flak, before Johnson introduced the “Early Parliamentary General Election act 2019”, for early action, that eventually took place on 12th December 2019. In terms of the campaign of the election, Brexit was a major issue being highlighted by the Conservative Party, while their primary opponents, the Labour Party focused their campaign around revamping the health care systems by defending the National Health Service of Britain.

The result was heavily in favour of the Conservative party, who surpassed the required figure of 326 easily and were rewarded with one of the biggest victories since Margaret Thatcher’s victory with 364 seats. Boris Johnson was once again appointed as the Prime Minister of the country and in his winning speech, he stated that he will keep his word and honour the public’s mandate of “getting Brexit done” by January 31, 2020. Since then, statements from the Government have indicated the fact that a deal scenario has been negotiated with the representatives of the European Union and that Britain will formally leave the European Union on the date that has been decided previously.

Impact of the United Kingdom Elections on Brexit

As soon as the results of the elections were announced, it was clear that the United Kingdom was destined to Brexit after giving a humongous and overwhelming majority to the party whose campaign slogan was “Get Brexit Done”. The challenges after the election were still big, even though limited in number as the majority gave them the opportunity to pass either of the Deal or No Deal scenario through the parliament without any trouble. The challenges that remained were obtaining a deal from the European Union, which could lead to a promising trade situation with the rest of the EU and could also boost the economy of United Kingdom, rather than hampering it, as it had in the last 3 and a half years since the Brexit referendum, primarily driven by the uncertainty of the consumers, as well as the businesses who remained unsure on the consequences and economic impact of one of the biggest geo-economic moves of the 21st century. The challenges would not stop at this, as post-Britain’s exit, the need of the hour would be to enter into new trade agreements with the rest of the world, for the first time since entering the European Union Trade bloc around half a century ago. This challenge would include the fact that London is one of the world’s top global financial capital, and Mr Johnson would want it to be that way, and at the same time, to keep the consumers as well as the economic and business lobby on his side in these divisive times.

Another economic impact could be felt by the European Union as well, whose leaders have come out post the UK elections and stated that the European Union is prepared from any backlash that the Brexit could cause and they hoped for good and loyal negotiations with the re-elected Prime Minister of the United Kingdom. This, of course, was later followed by the announcements from both sides regarding a Brexit deal being struck, the details of which will follow, and the United Kingdom would exit the EU formally on January 31st, 2019.

How did the Footsie Stocks respond to the result? 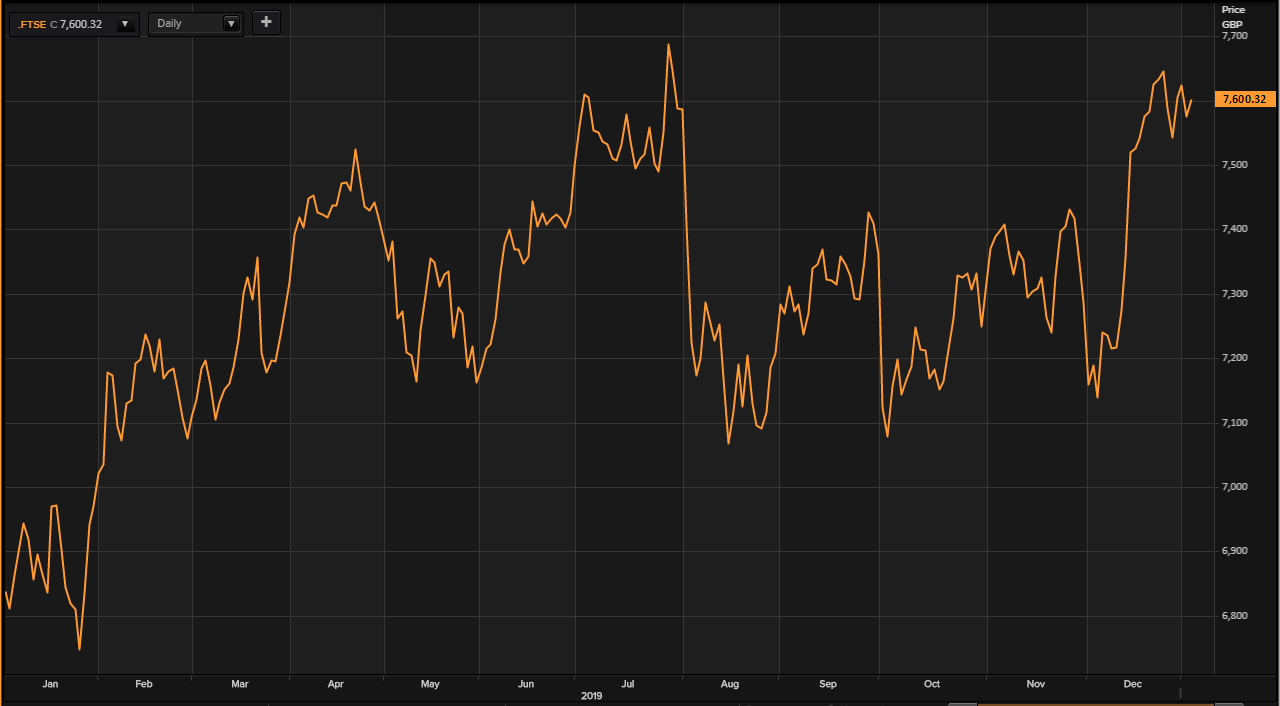 (Source: Thomson Reuters) Daily Chart as on 07-January-20, prior to the closing of the London Stock Exchange

The United States of America and the Islamic Republic of Iran have had poor relations since the last 60 years when in 1953, the US Government removed its leader through a coup. In 1979, Iran revolted and took down the leader. The relations between the two deteriorated further on 3rd January 2020, with a US Drone Airstrike in Baghdad, the Capital of Iraq, killing Major General Qassem Soleimani, chief of the elite Quds Force who was also one of Iran’s most influential figures. This development straightaway led to tensions between the two countries as Iran vowed to take revenge for the operation in a time and place of their choice and US President responding to this with statement- making threats of his own. This was also followed by news of unrest in various parts of the middle east. Iraq wanted the US troops to leave the country, but Donald Trump threatened Iraq with economic sanctions if any such actions were made. This led to a huge economic impact as well, as oil prices shot up straight away, amidst fears of the unrest in the middle east, which is the hub of oil, and prices of oil as an asset eventually affect everything. On 6th January 2020, Boris Johnson, along with the other major European leaders, issued a joint statement, requesting a de-escalation in the conflict between the two countries. This came after the government officials discussed that the escalation of this conflict or a situation of war could have an adverse impact on the current economic climate, which was showing some sign of recovery in the last quarter of the previous year, especially for Britain. Even though the British Government has shown support to the Donald Trump regime, they know that the United Kingdom is itself in the middle of a major overhaul pre and post-Brexit, and a war-like situation might not be the best for the country right now.