Which are 5 hot NZX-listed penny stocks?

Penny stocks because of their low prices allure investors, especially small-time traders and new entrants to the stock market, for one can easily invest in many shares by just investing a small amount.

Though being characterised by their volatile nature and low liquidity, not all penny stocks are destined to fall. Some of them are attractive companies with good financials and growth potential.

Having said that, let us cast a glance at the five NZX penny stocks. 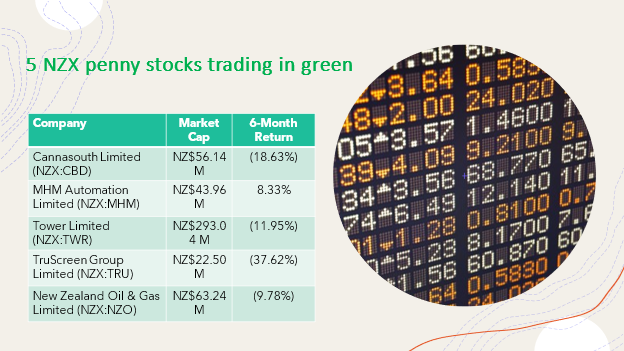 Recently, the Company had disclosed its half-year results ended 30 June 2021, wherein it recorded an operating loss of over NZ$1 million, which was in line with CBD's business plan, reflecting the ramping up of its investment to make the Company a leading medicinal cannabis company across the country.

Related Read: Are these 5 NZX healthcare stocks flourishing amid COVID-19?

Its cash position stood at NZ$4.63 billion towards the end of the period.

Moreover, during the said duration, CBD was granted the supply activity under its commercial medicinal cannabis Licence and successfully raised NZ$4.5 million through a share purchase plan and public offer.

The Company looks forward to achieving significant milestones in the coming months.

MHM Automation Limited is a famous manufacturer and distributor of automated systems for food processing and logistics companies across the globe. The Company has recently declared that its Annual Meeting was scheduled to be held in Christchurch on 29 October.

Also, the closing date for sending director nominations is 28 September.

Must Read: Which are the five popular NZX-listed material stocks?

Headquartered in Auckland, Tower Limited functions as an insurance company offering general and fire insurance. The Company has designed its new office space and has moved there.

The new office is specifically designed keeping in mind energy efficiency, which would promote the Company’s collaborative working, thereby help in transforming it into a digital and data-led insurer.

TruScreen Group Limited had organised its online Annual Meeting earlier this month. Resolutions were passed for authorising the Board to fix RSM Hayes Audit Auckland’s remuneration as the auditor of the Company.

Among others, resolutions for electing and re-electing directors were also passed by the shareholders.

Interesting Read: Which are the top 10 NZX healthcare stocks?

Wellington-based New Zealand Oil & Gas Limited is an exploration company. It has recently been granted consent to takeover Amadeus Basin Assets by the Northern Territory Government.

It is noted that the said transaction was announced in May 2021, while its effective economic date is set at 1 July 2020.

With a vigilant and cautious approach, investors can explore penny stocks as per their risk appetite and might discover huge potential, thereby watch their investments grow.