Is Skellerup Holdings(NZX:SKL) enroute to sustainable growth through latest acquisition?

New Zealand-based Skellerup Holdings Limited (NZX:SKL) is known to be a distributor and manufacturer of polymer products and vacuum systems. In a recent announcement, the Company updated that the directors had completed the acquisition of the assets and business of Talbot Technologies. The trade name for the newly acquired business shall be Talbot Advanced Technologies Limited.

Late last month, the company had announced the acquisition of Talbot Technologies for a price of $NZ10 million. Talbert, which is known to engineer plastic products, has been in the industry for over 25 years. David Mair, the CEO of Skellerup Group, was of the view that that was a natural next step for the Company as its capacity is to design leading supplies that catered to industries such as technology, electronics application as well as healthcare.

The Company is on its path to create growth potential for itself, with this strategic acquisition that will help align the goals of the Company better in the near future. It is a step towards expanding the functionality of the organisation that means expanding its revenue generation capacity in the longer run. 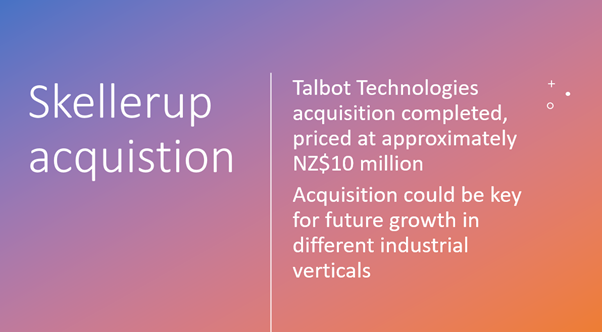 It is to be noted that these results have been achieved despite the effects of COVID-19, which caused different kinds of challenges for different businesses across the world.

With the aim of investing in sustainable financial gains in the future, the Company works with the goal of bettering the lives of its clients, providing them feasible solutions. The supply of safe drinking water, one of the biggest applications of the Company, and it takes it very seriously, considering how it can have huge impacts on the health and wellness of people.

A substantial final dividend of 10.5 cents per share, to be paid on 15 October 2021, was offered by Skellerup, displaying strong earnings and stable cash flow.

The resilient growth witnessed in the Company’s earnings through the year is a positive indicator of the fact that things are moving in the right direction for it.