Which are 5 popular retirement villages stocks on NZX?

Retirement living is increasingly gaining popularity among the elder population as it offers an array of benefits and facilities.

Here in this article, we would look at the five most sought-after NZX-listed retirement stocks. 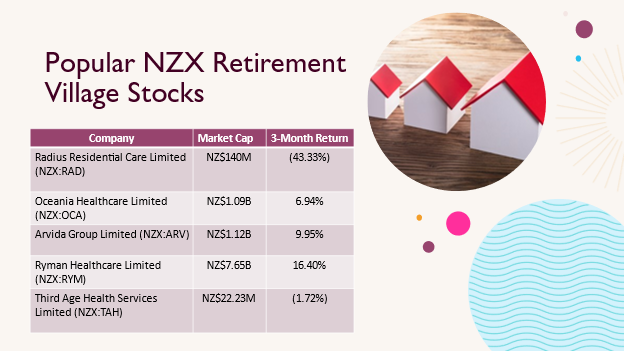 Established in 2003, Radius Residential Care Limited is one of the leading providers of retirement villages with over 20 locations across New Zealand. The Company has revealed to hold a virtual Annual Shareholders’ Meeting on 22 September.

On 17 September, at the time of writing, Radius Residential Care was trading flat at NZ$0.550.

Oceania Healthcare Limited specialises in aged care living. The Company has recently revealed the interest rate for its seven-year secured fixed-rate bonds, which is set at 3.30% per annum.

It must be noted that the first interest payment would be made on 13 December this year.

With 32 retirement communities across Kiwi land, Arvida Group Limited offers a wide range of retirement living options. The Company has shared the results of its Annual Meeting, which was held in Christchurch.

Resolutions were passed for the election and re-election of the directors. Moreover, the Board was authorised to fix the fees and expenses of its auditors for the ensuing year.

Also Read: What are six most exciting stories on NZX today?

Umbers would replace Gordon MacLeod and join RYM on 25 October.

Recently, the Company published the results of its ASM, wherein ordinary resolutions were passed for the re-election of Bevan John Walsh and Wayne Geoffrey Williams as the directors of TAH.

A resolution was also passed to elect Diane Lynn Budres as the Company's director and has granted authority to other directors to fix the auditor's remuneration.

Related Read: How are 6 interesting stocks performing on the NZX?

New Zealand offers world-class retirement villages, which take utmost care of its aged residents. Moreover, these retirement villages gained huge popularity amid recent times of the pandemic as they left no stone unturned to safeguard their residents from the ghastly pathogen by adhering to all the requisite safety norms.