As the market players are aware, the coronavirus pandemic impacted several sectors and companies. However, there are companies which are now well-positioned to perform well and these companies can also navigate tough conditions. This company is possessing decent balance sheet which could help it moving forward. The Board of this company is focused on increasing the shareholder value. The stock of this company has increased by ~39.3% in 1 year and, in the time frame of 6 months, this company’s stock price rose by ~45.88%.

Based in NZ, Geneva Finance Limited (NZX: GFL) happens to be a finance company. The company is the specialised player in providing car loans and personal loans. It is engaged in providing finance and financial services to the consumer credit and small to medium business markets.

The company has delivered a decent performance during the six months ended 30 September 2020 with 8% YoY increase in revenue from continuing operations. Operating costs grew merely by 2% primarily due to a lockdown in April. Further, GFL has recorded a 44% YoY rise in pre-tax profit to $3.3 million led by Quest insurance and the invoice finance operation. Besides, GFL witnessed a 7% increase in its total group assets to $132 million and its equity to total assets ratio rose to 24.4% from 23.9% in H1FY20.

Do Read: Geneva half yearly financial reports surge by 44%

Moreover, each of the trading operations managed to build on the business improvements which were initiated in the last year, with all placed to deliver improvements in profit in the H2 of the financial year. Quest Insurance Group Limited posted the pre-tax profit amounting to $1.6 Mn, reflecting an increase by $0.9 Mn (or 126%) as the result of improved underwriting performance as well as increased investment income. 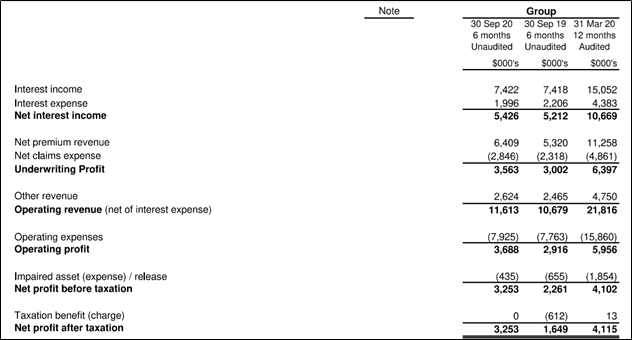 GFL, on 15 March 2021, stated that its FY21 net profit before tax (NPBT) is expected to stay between $6.3 million to $6.5 million, reflecting the significant growth of 56% over the last financial year. The company also stated that the trading results since September 2020 have been exceeding the anticipations throughout the consumer finance (New Zealand and Tonga), insurance, invoice factoring as well as debt collections business units.

On 10th May 2021, the board of directors declared a final dividend of 2.50 cents per share, a whopping 67% increase on the 1.50 cents per share paid last year. This was driven by the improved performance. The dividend would be payable on 10 June 2021.

He has been engaged in the public practice in NZ for more than 25 years and as the result possesses extensive knowledge as well as experience in the business advisory, accounting, taxation, trust and insolvency. Over the years, Daran has been helping the clients in the numerous complex commercial matters.

Notably, in the same release, the board of the company also announced that Robin King was elected to take the role of Chairman.

In the release dated 15th March 2021, the company stated that each of the business units contributed towards the profit increase. However, the finance operations (invoice factoring as well as consumer finance) and Quest Insurance offered the majority of the uplift. Notably, new lending volumes have been tracking ahead of the last year. The traditional seasonal spike in the finance arrears was lower than the previous years, implying continued improvements in the ledger quality. Further, it is experiencing steady improvements in its debt collections and debt litigation business.

Heightened emphasis on the core lending businesses assisted by the related insurance and debt collection functions has resulted in the broad-based profit improvement.  However, there are still risks of further lockdowns which could affect the performance.

To drive further growth, GFL stated that it continues to focus as well as implement operational improvements to the core lending, insurance as well as debt collection business operations.

The company has managed to deliver a 44% rise on the prior year’s pre-tax profit despite the interruptions related to the coronavirus pandemic. On the operational front, this was mainly attributable to the ongoing improvements following the personnel as well as business changes which were put in place in the latter part of previous year and the beginning of the current year. This positive outcome happens to be the steppingstone in the right direction. It needs to be noted that the board of the company is committed towards building on this result in order to further increase the shareholder value.