Are these 5 NZX dividend stocks worth considering in 2022?

Dividends are paid by well-established firms, and they project the paying company as a robust entity in the equity market and develops better confidence among investors.

Typically, large-cap companies make dividend payments to their shareholders, unlike small-cap ones that majorly reinvest their profits into the company for further growth and expansion.

Let’s have a look at the performance of 5 NZX dividend stocks this year. 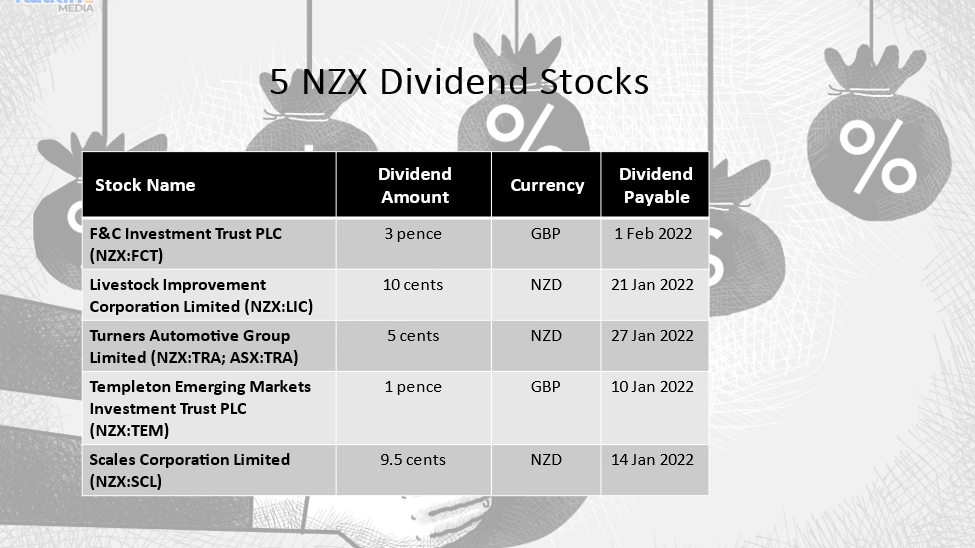 Franklin Templeton Investment Trust Management Limited on behalf of TEMIT reported that the unaudited cum-income net asset value of TEMIT stood at GBP2294.339 million as of 6 January 2022, representing an NAV of 194.26 pence per share.

DO READ: Why to consider these 2 NZX financial stocks in 2022?

The Company paid an interim dividend of 1 pence per share on 10 January 2022.

Scales Corporation notified that Sun Qiang, one of its directors, has resigned from her position. The Group expects its underlying net profit to be at the upper end of the previously estimated range of $32 million to $37 million for the 12 months to 31 December 2021.

FCT’s net assets per ordinary share -ex income stood at 976.3 pence, as of 6 January 2022 before changes at market value. The Group announced that one of its executive directors Sarah Arkle has been hired as a non-executive director of Vietnam Enterprise Investments Limited effective 5 January 2022.

ALSO READ: Would these 5 popular NZX stocks rally in 2022?

FCT will pay an interim dividend of 3cps on 1 February 2022.

Livestock Improvement Corporation notified on 8 December that a special dividend of 10cps would be paid to its shareholders. The fully imputed dividend of $14.2 million will be paid on 21 January 2022.

Turners Automotive reported a 25% rise in EPS to 19.6cps for the 6 months to 30 September 2021. A dividend amount of 5cps has been announced for the interim period and the amount will be paid on 27 January 2022.

ALSO READ: Are 3 NZX REIT stocks worth considering in 2022?

Dividends are not guaranteed payments and can be paid by mature firms seeing slow growth. Subsequently, investors must carefully choose and invest in a dividend stock.