Which are 5 NZX food stocks to explore before 2022?

The latest statistics from Stats NZ released on Tuesday revealed that food prices witnessed a fall of 0.6% in November 2021 compared to October 2021. The decline in food prices was driven by lower prices of tomatoes. Tomato prices saw a decline of 49% in November while their prices were higher by 54% last year.

However, annual food prices rose 4% in November due to higher prices for grocery food and restaurant meals and ready-to-eat food.

Amid this backdrop, let’s see how these 5 NZX food stocks are doing at the year end. 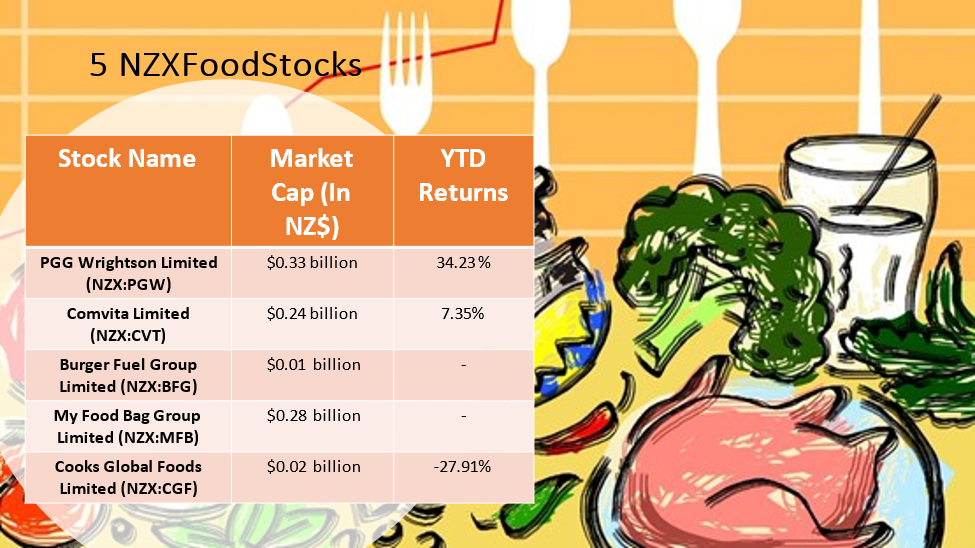 PGG Wrightson announced this month that it was increasing its Operating EBITDA guidance to nearly $58 million for FY22 after excellent spring trading in H1 FY22.

The Group’s Chairman Rodger Finlay was pleased with the business performance and appreciated the response from people showing flexibility to altering COVID-19 operating protocols.

Comvita announced on Monday that it had invested $1.3 million in a clinical trial programme, which is also supported by the High-Value Nutrition (HVN) National Science Challenge to understand the effects of Manuka honey on digestive health.

The programme will be delivered in partnership with the University of Otago and research partners will be given $875K in funding from HVN.

Related Read: Which 2 NZX food stocks can be considered amid inflation?

Moreover, BFG’s total system sales witnessed a rise of 11.63% in the period on pcp, with total store numbers reaching 77 globally (as of 30 September 2021).

My Food Bag informed on 7 December that the foreign exchange rate to be used for the Company’s interim dividend that will be paid to Australian investors has been fixed at 0.9625.

The Group plans to pay 3cps on 16 December.

Cooks Global notified on 7 December that Michael Ambrose had been appointed as an Independent Director of its Board.

He served as a creator and Founding Director of Arvida Group Ltd while holding roles at many other organisations.

The food industry of New Zealand has majorly stayed resilient and confident of improved future performance.