New Zealand has been lauded worldwide for its successful handling of the coronavirus pandemic and regaining its path to the economic recovery. As a result, the nation witnessed a credit rating rise in its S&P Global Ratings from AA to AA+ with a stable outlook.

It is one of the most developed nations across the globe, with a GDP of about US$209 billion. 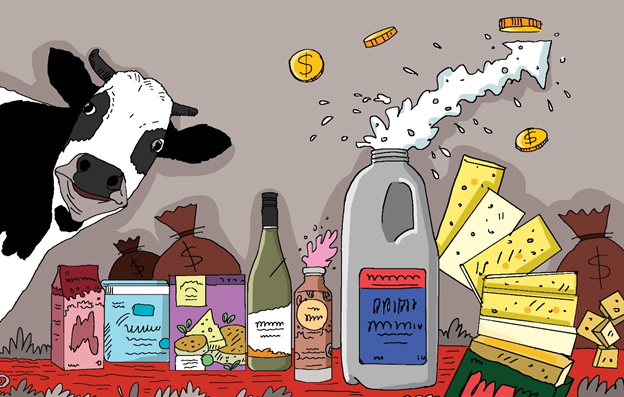 Despite being a tiny island nation, New Zealand is the eighth-largest dairy producer worldwide. Its dairy sector is highly modern, innovative as well as integrated, which drives the economy.

In 2020, the country exported dairy products worth NZ$19.7 billion. Aotearoa’s dairy sector has come a long way as it has witnessed a massive rise in its dairy exports in the last 30 years, from just NZ$2 billion per year to nearly NZ$20 billion a year.

Moreover, the dairy industry is underpinned by huge levels of investments in research and development, which give strength and supremacy to the Kiwi nation's dairy sector.

Must Read: Dairy Companies Eye a Good 2021 due to their innovative strategies

Dairy: a major source of livelihood and a prime contributor to the Maori community

The dairy sector provides livelihood to more than 40,000 people and has created jobs at a much faster pace than the rest of the economy, according to reports.

By providing jobs and boosting the nation’s economic activity, the dairy industry has significantly contributed towards sustaining the country’s infrastructure.

Furthermore, this dairy industry has contributed to the expanding Maori economy, as 10% of the NZ dairy farms are under the Maori ownership.

How have the Canterbury floods impacted the dairy sector?

The torrential rains, which engulfed most of the Canterbury regions, caused widespread damage to the infrastructure and the road network. Hence, a state of emergency was declared for the region.

The massive floods have particularly impacted the farming community across the region, which has witnessed severe damage to the farms and the fodder crops.

To support its farmers and growers, the NZ Government has announced relief worth NZ$500K.  The funds would be utilised towards the recovery of the farming businesses, as well as providing specialist technical support to the affected farmers.

Amid the given backdrop of the New Zealand dairy industry, let us look at a few dairy stocks.

Founded in 2000, Synlait Milk Limited is one of the leading dairy processing companies in New Zealand. With specialist farming bolstered by high-end processing units, SML supplies a wide range of health and nutritional milk products both in the domestic as well as international markets.

Normal operations at its Dunsandel facility begun, after the floodwaters had begun receding. Synlait’s prime focus now is to support its farmer suppliers, who have been adversely affected by the unfortunate event.

SML has affirmed that its FY21 production plans and guidance will, however, not be impacted by the recent floods.

Read: 5 NZX Stock Stories To Keep A Tab On Monday

Another dairy-based company is Fonterra Co-operative Group Limited, which is a global dairy cooperative owned by around 10K farmers. Its portfolio boasts some of the renowned brands like Anchor, Anlene, Anmum, Farm Source and NZMP.

FCG processes nearly 16 billion litres of milk per year, with more than 30 manufacturing units spread across the Kiwi land.

The Group exports 95% of its production to about 130 countries around the world, and 25% of NZ exports comprise Fonterra's dairy products.

Do Read: What are major NZX announcements and where to find them?

Established in 2000, The a2 Milk Company Limited is New Zealand’s celebrated dairy nutritional company, which also has trading activities in numerous countries like the US, the UK, China, China, and Canada, etc.

In a recent announcement, ATM declared that it had complied with all the legal obligations and is unaware of any legal action against it. It is pointed out that a particular media division had reported a probable class action against ATM.

Read: Who is the major shareholder of The a2 Milk?

Is the NZ dairy industry sustainable?

With highly mechanised and skilled dairy farming, New Zealand’s dairy sector is poised for a sustainable and greener future with significant growth across the sector. After the initial impact of the pandemic, the NZ dairy industry is all set to regain its path to economic revival.

NZ dairy farmers are among the most efficient emissions-conscious milk producers across the globe, contributing a meagre 0.2% of the total global emissions.