As the results of the Canadian election are set to unfold, Canada’s main stock market index, the S&P/TSX Composite Index, saw a single-day decline of 1.64 per cent. This market reaction could be owed to anxiety and uncertainty around who forms the next government.

A consensus opinion says that the Liberals and Trudeau will retain power with a minority government.

Under the leadership of the current Prime Minister Justin Trudeau, Canada has established a remarkable reputation in the electric vehicle segment. The government supported the auto industry in investments and the need to cut down greenhouse gas (GHG) emissions, and Canada had committed to reaching zero-emission levels by 2050.

On the other hand, in its election mandate, the New Democratic Party (NDP) promised to waive off federal sales tax and offered an incentive to purchase made-in-Canada ZEVs. The political party is also keen to provide a rebate on installation costs of the electric chargers used for ZEVs.

The Conservatives stated that under them nearly 30 per cent of the light-duty vehicles sold would be zero-emission by 2030. An up-gradation of the electricity grid and charging infrastructure are also expected from them.

NFI Group Inc (TSX: NFI), a leading manufacturer of electric buses and coaches commented that on September 16 that one of its subsidiaries, New Flyer of America Inc., had received a contract to manufacture 19 electric buses and charging stations from Lane Transit District (LTD). The order received from LTD supports their goals to reduce 75 per cent of GHG emissions by 2030 and reduce the dependence on fossil fuel by 2035. 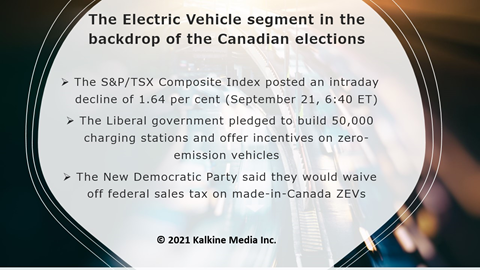