Ahead of the impending Brexit, Canada and the United Kingdom have agreed not to raise trade tariffs. The two nations will continue trade under current Canada-European Union Comprehensive Economic and Trade Agreement (CETA) terms, till the new Canada-United Kingdom Trade Continuity Agreement (Canada-U.K. TCA) is implemented.

Britain is Canada’s fifth-largest trading partner and with “two-way merchandise trade” valued at C$ 29 billion in 2019.

In an official statement, Deputy Prime Minister Chrystia Freeland and International Trade Minister Mary Ng, that both the nations will continue their “preferential tariff treatment”.

The United Kingdom will exit the European Union (EU) on January 1, 2021. At present, all trade deals are governed by the CETA, which Canadian Prime Minister Justin Trudeau had signed with the EU in 2016. It will be replaced by the Canada-U.K. TCA, under which the trade tariffs are likely to be same. 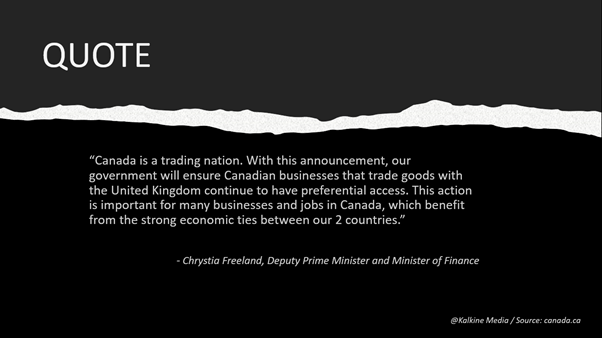 To ensure smooth continuity of trade and business, the federal government has released the Canada-United Kingdom Trade Continuity Remission Order, 2021. It will further safeguard that the current tariff benefits continue in the Canada-U.K. TCA.

Canada and the United Kingdom arrived at the post-Brexit trade agreement a month ago. Broader talks for the upcoming accord will be held early next year.

Finance Minister had introduced the legislation for the two-nation TCA in the House of Commons earlier this month.

Once adopted, the accord will help Canadian businesses in agriculture, fish, and seafood exporters. It will also ensure the access of Canada’s service-market to the UK. Canadian suppliers will also have extensive access to the C$ 188-billion British procurement market.