Suncor Energy Inc (TSX:SU), one of the biggest oil producers in Canada, has become the talk of the town ahead of its Q4 FYY2021 earnings scheduled to release on February 2.

The C$ 51- billion market cap company, on Tuesday, January 18, provided safety and production updates for its fourth quarter of fiscal 2021.

Suncor Energy has also recently noted a decrease of about 35,000 barrels per day in its average production due to outages in the fourth quarter ending on December 31, 2021.

Let us now look at Suncor Energy's financial numbers for the third quarter of fiscal 2021 and its recent stock performance.

The energy company, which presently has a price-to-earnings (P/E) ratio of 22.1, posted net earnings of C$ 877 million in the latest quarter, as against a loss of C$12 million in the same period a year ago.

Suncor Energy also paid an increased its quarterly dividend to C$ 0.42 apiece on December 24, up from that of a previous payment of C$ 0.21. 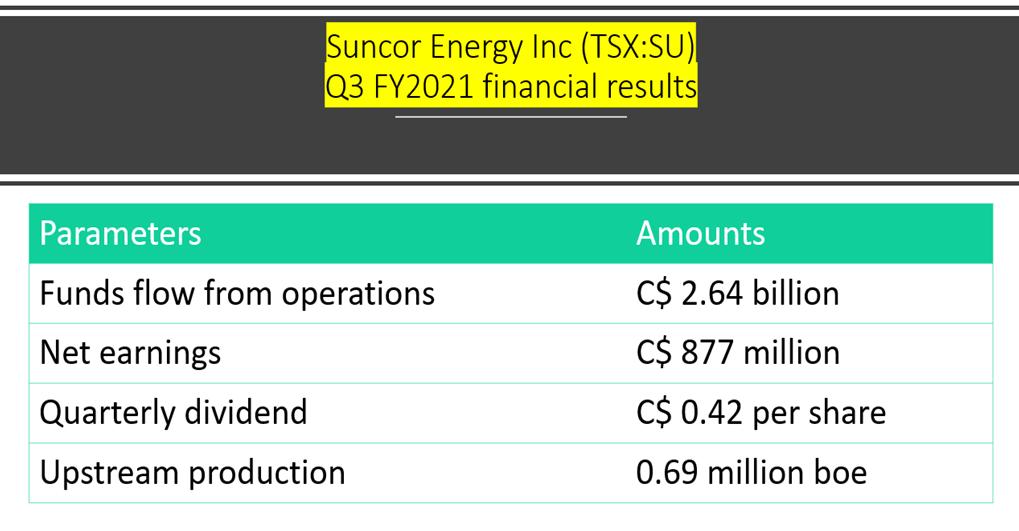 The Calgary-based integrated energy company recorded a total upstream production of 0.69 million barrels of oil equivalent (boe) in Q3 FY2021, which was up from that of 0.61 million boe a year ago.

Suncor Energy shares achieved a 52-week high price of C$ 36.65 earlier this week on January 18. On Thursday, January 20, the stock closed at a price of C$ 35.32 apiece, which was about four per cent down from the fresh one-year high.

As Suncor Energy had posted a robust year-over-year (YoY) revenue growth in its previous quarter, some analysts believe that it can continue this momentum in its upcoming earnings report due to rise in the energy prices.

However, investors should always note a company's operations and present market sentiments before investing.