The TSX Composite Index confirmed a correction Wednesday, May 11, having fallen 10.7 per cent from its all-time high of 22,213.07 points. However, the energy sector rose 1.5 per cent by market close.

On Wednesday, Kyiv blocked about a quarter of Russia’s oil flow to Europe, saying that interference from the occupying Russian forces was the cause. Reportedly, this is the first instance since the invasion where Russian exports via Ukraine have been hampered.

This comes on a backdrop of the EU considering a total ban on all Russian oil. So, let’s look at some oil and gas stocks that gained and may continue to gain should the ban go through.

The company is an LNG producer that sells to Europe. On Wednesday, its stock’s price spiked almost in double digits as it gained 9.9 per cent to close at C$1.11, its 52-week high.

Southern’s resources are in Southeast US states and its stock closed at C$1.08 Wednesday having spiked 9.1 per cent during the day’s trade.

The stock’s price-to-earnings (P/E) ratio is 4.7, which denotes how many dollars needs to be invested to net one dollar of profit.

Petro-Victory’s resources are in Brazil and its VRY stock closed at C$5.80 on Wednesday, ending the day 8.4 per cent in the green.

The Alberta gas explorer and producer saw its stock close Wednesday at C$12.36, up 4.75 per cent.

SDE has the best P/E ratio of these stocks, four, comparable to SOU’s 4.7 but better. 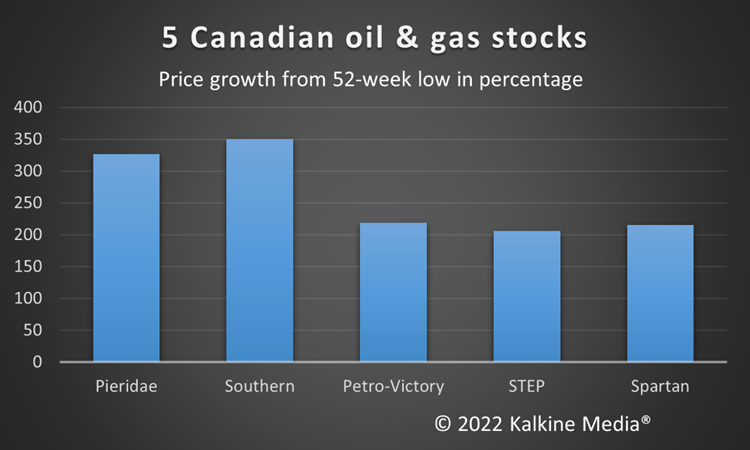 As visible in the graphic above, these stocks have soared many times higher than their 52-week lows and have all more than doubled this year. Furthermore, after the news from Kyiv broke about Russia’s gas flow to Europe being hit, these stocks spiked.

A complete EU ban on Russian oil would likely disrupt trade flows and push demand up further. In lieu of this, these Canadian stocks make for an interesting watch.