Is Suncor (TSX:SU) a Canadian energy stock to buy?

Suncor Energy Inc (TSX:SU) is currently one of the most actively traded stocks on the Toronto Stock Exchange (TSX), having noted a 10-day average volume of 12.9 million.

On Thursday, September 16, its stocks climbed by 0.2 per cent to close at a value of C$ 24.83. The Canadian energy company saw about 9.4 million of its shares trade hands during the trading session, going on to become one of the most actively traded stocks in terms of volume on the Toronto Stock Exchange on Thursday.

Suncor Energy is among Canada’s leading integrated energy firms with operations in oil and gas refining and marketing. It has active operations in the east coast and western Canada, the United States, and the North Sea.

Its stocks inched up by nearly six per cent in past one month. The oil and gas company’s stock surged by over 43 per cent in the last one year.

As of Thursday’s close, its year-to-date (YTD) returns stood at about 17 per cent, while its month-to-date (MTD) growth was nearly five per cent. 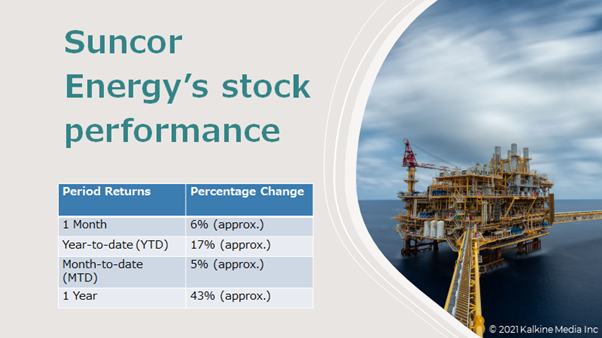 Presently holding a dividend yield of 3.3 per cent, Suncor’s quarterly dividend of C$ 0.21 per share is set to be paid next on September 24.

While Suncor traded in green on Thursday, the S&P/TSX Capped Energy Index slipped by 0.92 per cent. The Brent crude, on the other hand, rose by 0.3 per cent to US$ 75.67 a barrel on Thursday.

The integrated energy firm posted operating earnings of C$ 722 million in the second quarter of fiscal 2021, as compared to an operating loss of C$ 1.345 billion in Q2 2020.

Suncor Energy is majorly focused on the prolific Athabasca oil sands in Canada, and in addition, it markets and refine crude oil in Canada and internationally. After having suffered through massive production and operations hiccups last year following the onset of the COVID-19 pandemic, the energy stocks seem to on a path to recovery.

Last week, the oil and gas company announced restructuring for two offshore projects in Canada, including the Terra Nova project in the east coast.

As part of the restructuring, it now leads the project with a 48 per cent stake, while others players, namely Cenovus Energy Inc (TSX:CVE) and Murphy Oil (NYSE:MUR), holds 38 per cent and 18 per cent stake, respectively.

Terra Nova is among one of the largest Canadian energy projects acquired by domestic oil firms.