As the Canadian aviation sector continues to struggle with pandemic-triggered challenges, the government is stepping in to help. Industry Minister Navdeep Bains said on Thursday, October 22, that the federal government will be “exploring all possible options” to support them. Canadian airlines have been reeling under the impact of the lockdown restrictions and federal aid for some time now. Air carriers such as Air Canada (TSX: AC), WestJet (TSX: ONEX) and Transat AT Inc (TSX: TRZ) have been struggling, with reports of pay cuts and asset sales coming up often. On the other hand, though, freight carrier Cargojet (TSX: CJT) has been making the most of the pandemic, with its shares continuing to rally.

Reduction of employee salaries and refund updates continue to keep Air Canada on the news. The largest Canadian airline even got involved in a Twitter feud with rival WestJet on Wednesday, October 21, when the latter claimed to be the first national carrier that chose to give refunds to original forms of payment. Air Canada lashed called the WestJet statement “misleading” and said it has already refunded more than C$ 1.2 billion to eligible customers.

Down over 68 per cent down this year, Air Canada stocks continue to sail way beneath their pre-pandemic levels. Since sinking to a low of C$ 12.15 (March 19) in March, Air Canada shares registered a decline of 12 per cent in the last six months.

Currently trending on the TSX for its heavy trading activities, Air Canada stocks record an average trading volume of 3.8 million in the last 10 days. 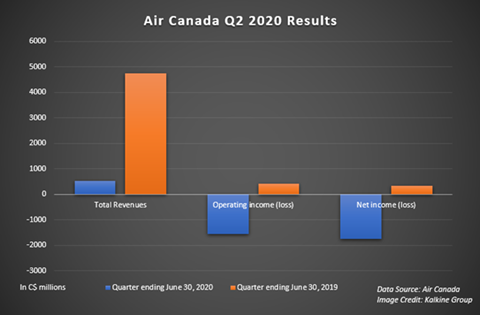 The pandemic’s impact on the top Canadian carrier reflected in its second quarter financial results, which posted a substantial 89 per cent YoY decline in its total revenues of C$ 527 million. Air Canada’s total count of passengers carried for Q2 2020 was down 96 per cent YoY.

Air Canada is set to present its third quarter results on November 9, 2020.

WestJet Airlines' recent kerfuffle with Air Canada came on the heels of its new policy in which it is offering refunds for customers if the airline cancelled their flight. WestJet added that it would be able to provide refunds “proactively” going forward, in the light of its recent pay cuts and fleet parking.

Shares of Onex Corporation, which currently owns WestJet Airlines, are down 29 per cent year-to-date (YTD). The stocks sank nearly six per cent in the last six months. 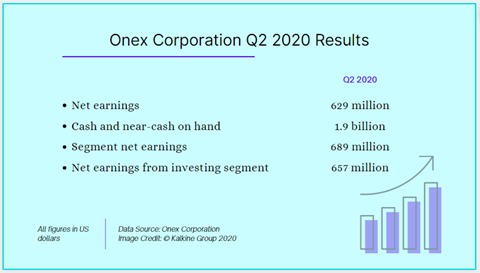 Onex Corporation will be announcing its third quarter results on November 13, 2020.

Cargojet Inc made the best of the worst times amid the coronavirus pandemic. Riding on the increasing demand of online deliveries and absence of regular passenger flights, Cargojet’s business soared in the last seven months, and so did its shares.

Earlier in October, Cargojet President and CEO Ajay K Virmani was named the Strategist of the Year and one of Canada's top leaders of 2020 by the Globe and Mail's Report on Business.

Shares of Cargojet registered a growth of over 115 per cent this year. Its scrips steadily climbed over 83 per cent in the last six months. Cargojet stocks are currently ranked high on the TSX,

The top Canadian freight carrier secured a 65 per cent YoY growth in its total revenue of C$ 196 million in the second quarter ending 30 June 2020. Its gross margin was up 241 per cent YoY.

The company also pays a quarterly dividend of C$ 0.234, which currently yields 0.414 per cent, as per the data on the TMX Group.

Cargojet will be announcing its third quarter results on November 3.

Invest in US Equities for Global Exposure

Investing in US equities is a great way to secure capital appreciation. Though opinions are divided around US equity investment in these volatile times, however it is important to note that the Nasdaq Composite Index has rocketed up 6,162 per cent since its inception.

The US stock market is home to some of the fastest growing and futuristic companies in the world. It is a market that has matured with time and outstripped other global equities, generating high returns to investors. Even in the wake of coronavirus pandemic, US equities continue to be resilient.

For investors looking to enter the dominating US equities landscape, the timing has never been better. This market is poised to outpace its peers in the next decade.

And against this backdrop, Kalkine presents an exclusive US equity report that will help you build a high-growth stock portfolio.

From quantitative analysis to market risk predictions, we have used a thorough stock selection process spanning the entire spectrum of US capital markets.