On Wednesday, December 1, Royal Bank announced that it will increase its quarterly dividend by 11 per cent to C$ 1.2 per unit. In addition, the bank hopes to repurchase 45 million of its common shares and has applied for approval from the Office of the Superintendent of Financial Institutions (OSFI).

The largest bank in terms of market capitalization, Royal Bank's net income increased by 40 per cent year-over-year (YoY) to C$ 16.1 billion. Meanwhile, in the fourth quarter of this year, the bank's profit surged to C$ 3.89 billion, representing an increase of 20 per cent YoY.

Although the bank's profit in Q4 2021 increased, it missed beating the analysts' expectations. On an adjusted basis, Royal Bank's profit was C$ 2.71 per share, and the analysts had reportedly expected that the bank would earn C$ 2.81 per share. 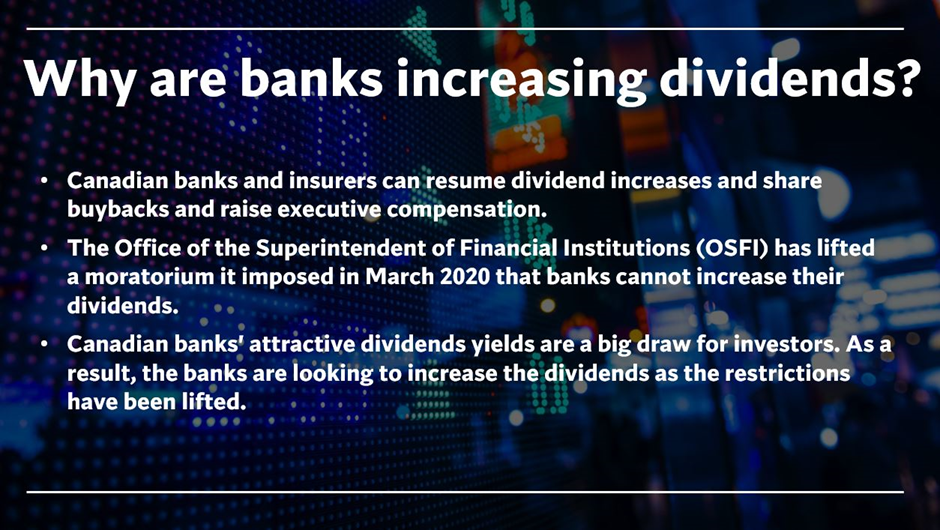 How did the National Bank (TSX:NA) perform?

One of the biggest banks in Canada, the National Bank has announced that it will increase its dividend by 23 per cent to C$ 0.87 per share. It is also looking to repurchase seven million of its common shares.

The earnings were C$ 2.21 per share on an adjusted basis, and it was more than the analysts' expectation of C$ 2.19 apiece.

In Canada, stock market investors often prefer bank stocks as they have given returns to them over the years and are backed by strong fundamentals.

Since the beginning of this year, RY stock has returned 20.8 per cent to the shareholders. Meanwhile, the NA stock surged 38.6 per cent year-to-date (YTD).