As the Bank of Canada left interest rate altered on January 26, investors are seemingly moving back to riskier options like electric vehicles (EV) stocks.

The EV industry is among the few growing spaces today, and it is believed to be the future of the automobile sector by many. Some legacy automakers worldwide are now turning their focus to electrifying their fleets, which, while spurring increased competition in the EV market, can cause the industry to grow at a much faster pace.

That said, let us get to know two Canadian stocks that can emerge as significant players in the booming EV industry.

The Montreal-headquartered EV maker recently took possession of its Joliet Illinois facility, where it said that critical equipment will be used to manufacture its electric vehicles.

The C$ 2-billion market cap firm said its first vehicle is expected to come off the production line in Q2 2022.

The Canadian EV company generated a revenue of US$ 11.9 billion in Q3 FY2021, which was US$ 9.3 million up from the previous year quarter.

Lion Electric also earned a profit of US$ 123 million in the latest quarter, marking a significant improvement from a net loss of US$ 38.6 million a year ago.

Stocks of Lion Electric closed at C$ 10.65 apiece on Thursday, February 3, returning a week-to-date gain of over four per cent. 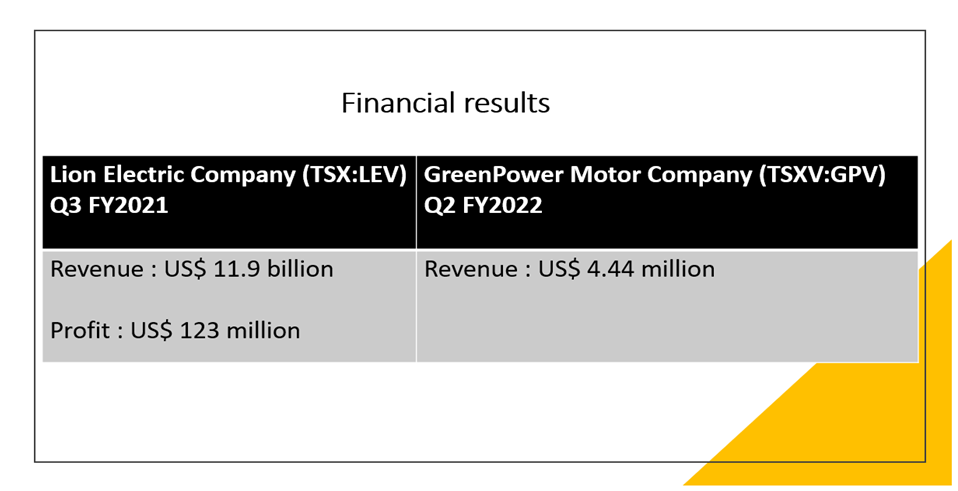 GreenPower Motor Company, a Vancouver-headquartered manufacturer of electric medium and heavy-duty vehicles, is said to have signed an agreement, in January this year, to lease/purchase a manufacturing facility in South Charleston, West Virginia.

GreenPower stock closed at C$ 7.5 apiece on Thursday, with a week-to-date (WTD)return of almost 16 per cent.

The EV manufacturing space, in the right scenario, can grow substantially in the future to become a prominent player in the renewable tech industry, as such cars become more affordable and more people opt for it.

Keeping in mind the industry's future growth prospects, some Canadian EV stocks, at their current valuations, can be a healthy pick for growth investors.