Why is Netflix (NFLX) stock trending?

Stocks of video-streaming giant Netflix Inc (NASDAQ: NFLX, NFLX: US) has been trending high in the markets following some company updates.

Netflix stocks tanked by over four per cent on Thursday, January 20, with its daily trading volume hitting a total 12.65 million shares, after the Californian company released its fourth-quarter financial results for fiscal 2021.

Let us have a close look at Netflix’s latest financials and its stock performance.

The C$ 225-billion market cap streaming and media company saw a top line growth of 16 per cent year-over-year (YoY) to US$ 7.7 billion in the latest quarter.

Netflix generated an operating income of US$ 632 million in Q4 FY2021, which was down from US$ 954 million in the fourth quarter a year ago.

The media-diversified company also earned a net income of US$ 607 million in Q4 FY2021, as compared to US$ 542 million a year ago.

However, 8.28 million net adds in the latest quarter fell short of the expectations of 8.5 million (also the previous year net adds), which may have hurt the market sentiments and triggered Netflix’s stock price fall on Thursday. 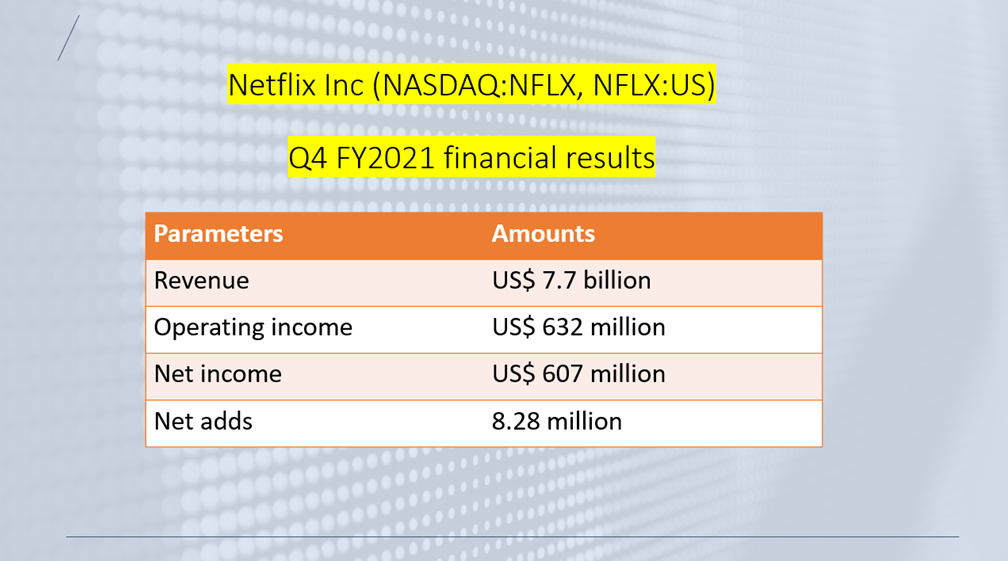 Netflix has noted that it is focused on improving its streaming and entertainment business in order to grow its members and increase their leisure time.

The company expects its revenue to reach US$ 7.9 billion and bring in 2.5 million new subscribers globally in the first quarter of fiscal 2021

The media and streaming stock has dipped by over 13 per cent in the last 12 months.

Netflix Inc streamed some of the most popular shows among global audiences in 2021, such as Squid Game. The company pointed in its latest earnings report that it remains “optimistic” about its long-term growth despite the market uncertainties and increasing competition in the field of online content streaming and video services.