The COVID-19 pandemic hit some sectors and industries severely, however, at the same time, it benefitted and expanded the opportunities for some companies like online media platforms and eGaming sites etc.

However, with the improvement in vaccination rates and easing of Covid protocols, the movie theater business in the entertainment industry is also slowly coming into the picture.

On that note, let us discuss the stocks of some of the Canadian entertainment and media companies. 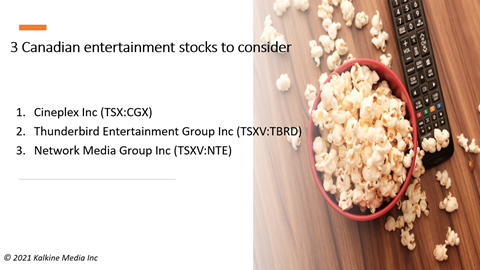 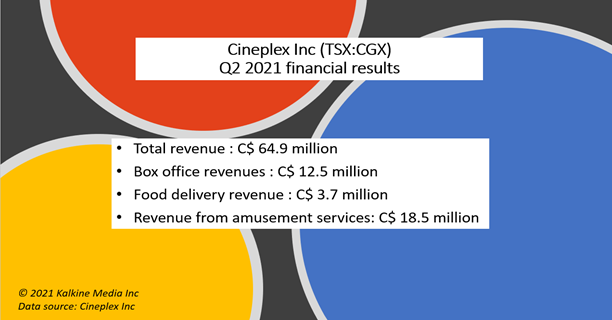 The reduced mandatory closures and easing of capacity restrictions helped the entertainment company to improve the box office businesses. The company reported box office revenues of C$ 12.5 million, in its latest quarter.

The company posted a YoY growth in media revenue of 50.3 per cent to C$ 2.4 million in the latest quarter. The revenues from amusement solutions also marked an increase of C$ 18.5 million to C$ 22.2 million from the previous year’s quarter.

The stock of Vancouver-headquartered multi-platform media house Thunderbird Entertainment Group Inc witnessed an increase of more than 138 per cent in the past year. Its stock soared by almost 53 per cent in the last nine months and expanded by about 60 per cent on YTD basis.

Thunderbird, on the third quarter of fiscal 2021, posted a 27 per cent YoY growth to C$ 37.7 million in its revenue. This rise was primarily due to an increase in production services for kids and families.

The production services revenue jumped by 52 per cent to C$ 19.4 million in Q3 2021, which mainly resulted from an increase in the number and size of contracts, up from the same period of 2020.

The company recorded an adjusted EBITDA of C$ 7.4 million, marking a YoY increase of eight per cent, which resulted from the increase in production services as well as licensing and distribution revenue. The entertainment house stated a free cash flow of C$ 1.8 million and production backlog of C$ 102.2 million in Q2 2021.

The company announced that it will be filing its fourth quarter financial results for the fiscal year 2021 pre market on Wednesday, October 20.

Investors should keep in mind that the entertainment industry is vulnerable to changes in business cycles and economic shocks, which makes some of these stocks volatile. Investors should consider the risk factors attached with investment in these stocks.