The S&P/TSX 60 Index's December Futures were up by 0.2 per cent at 7 AM EST on Friday, October 15. The Canadian energy-heavy main stock index futures made gains, and higher crude oil prices propelled this.

As the market has been making gains since the past few weeks, let's explore some events that could influence the market on the last trading day of this week:

Oil prices clock US$ 85 per barrel

For the first time since late 2018, oil prices jumped to US$ 85 per barrel as a global energy crisis has tightened the crude oil market. As a result, Brent Futures made a gain of 1.3 per cent and rose to a high of US$ 85.1 per barrel.

A shortage of coal and gas has led to a spike in demand for oil products from the power market. As a result, according to the International Energy Agency (IEA), the Asian markets are witnessing a higher demand surge than the other markets.

Brent, a global benchmark for crude oil, has made gains for the sixth straight week. The energy crunch coincides with the economic recovery after the pandemic and the supply is also curtailed.

Saudi Arabia has urged that the Organization of the Petroleum Exporting Countries (OPEC) and its allies must restore output. Meanwhile, China has reportedly issued oil import quotas for more than 15 private refiners.

Breaking the silence on the Evergrande Group crisis, China's central bank has said that the risks to the financial system due to the group's situation seem to be controllable, and it is unlikely to spread.

People's Bank of China has said that the local governments and authorities are working to resolve the situation according to rule-of-law and market-oriented principles. 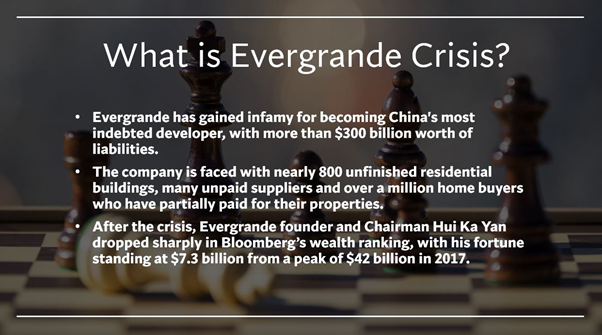 The Evergrande Group has more than US$ 300 billion of liabilities, and in recent years, it failed to manage its business well amid changing market conditions. There are concerns that the Evergrande crisis could spill over to other developers, however, the Chinese government is looking to cool the property market.

As markets were expected to take a hit due to the ongoing crisis, it would be worth watching how the investors respond to the central bank's latest statement.

Prime Minister Justin Trudeau is expected to reveal the roster of cabinet ministers on October 26. After the appointment of the ministers, they will have a month to settle into their jobs, and the Parliament would be recalled on November 22.

Also Read: Is MTY Food Group (TSX:MTY) a stock to buy and hold?

On September 20, the election results were disappointing for the Liberals as Mr Trudeau's government returned with a second consecutive minority and failed to secure the seats for forming a majority government.

The rising oil prices would be worth observing and studying the market pattern is essential. In addition, interested investors could look at individual sector performance before making investments.