The TSX main equity index has been in the red after the Bank of Canada (BoC) raised its benchmark interest rate to 2.5 per cent on Wednesday, July 13. Keeping in mind the possibility of an economic recession, new investors seeking balanced risk-reward in the long horizon could explore quality TSX stocks like BCE (TSX: BCE), Canadian National (TSX: CNR), Dollarama (TSX: DOL), Enbridge (TSX: ENB), etc.

So, without further delay, let us discuss nine such TSX stocks.

The telecommunication sector is one of the defensive sectors that could protect new investors against volatility risk in the long run. Hence, BCE, one of Canada's top communication service providers, could be considered amid the ongoing market environment.

Loblaw is one of Canada's largest retailers with grocery, pharmacy and general merchandise businesses. Loblaw announced that its banner Joe Fresh with its partner Sasha Exeter launched a summer sports capsule collection earlier this month.

Enbridge, a midstream energy supplier, is among dividend aristocrats in Canada. The pipeline infrastructure company recorded a dividend yield of over six per cent (annual dividend payout by the firm denoted shown as a percentage of its current stock price).

EMB stocks were up by almost nine per cent in a year. As per Refinitiv, ENB stock held an RSI of 39.85 on July 14. 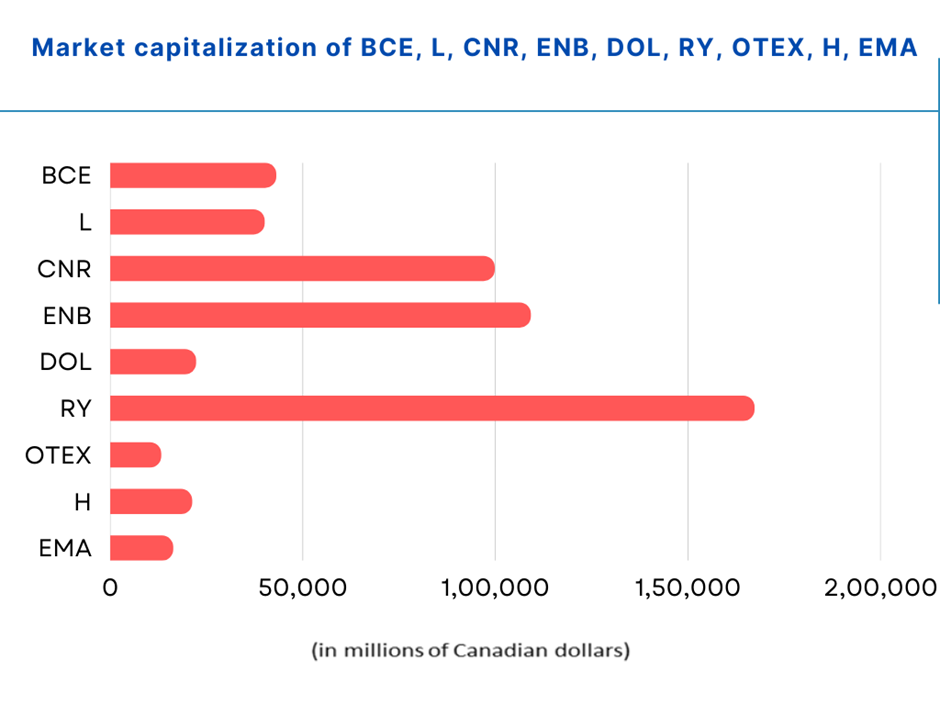 Dollarama is another consumer defensive stock that investors could consider. The discount retail stores owner have a market capitalization exceeding C$ 22 billion.

Dollarama is set for a quarterly dividend payment of C$ 0.055, due on August 5. DOL stock jumped by about 21 per cent year-to-date (YTD). According to Refinitiv, DOL stock had an RSI of 57.71 on July 14, with volume in the green territory, denoting a moderate trend.

However, when considering a long-term approach, investors could consider this bank stock available at discounted prices as it is among the top five banks, with a huge market capitalization (C$ 167.18 billion).

Open Text is a C$ 13-billion market cap company that could be an option for long-term investors looking to invest in the technology sector. The software company disburse dividends (US$ 0.221) every quarter.

OTEX stock declined by over 22 per cent and, according to Refinitiv data, held an RSI of 46.46 and noted a positive trading volume on July 14.

Low-risk investors generally prefer utility stocks as they offer necessary products and services like power production and transmission, which are defensive in nature. Hence, these companies could provide stability amid economic uncertainties.

EMA scrip shot up by approximately eight per cent in a year and, as per Refinitiv findings, recorded an RSI of 61.29, supported by increased trading volume, on July 14.

Though the current market dynamics are volatile due to mounting fear of an economic recession, new investors could explore these healthy TSX stocks to begin their investment journey. Additionally, these stocks distribute sturdy dividends, which can expand investors' portfolio income.