This was perceivably in the wake of what the next Canadian government will look like. Although many analysts believe that the well-established financial markets and hubs across the globe behave maturely, some political events may affect the market.

The cascading effect of COVID-19 and tensions around the healthcare sector during the election, might have caused the S&P/TSX Capped Health Care Index a gain of 3.14 per cent intraday (September 21, 9:43 ET).

Key election mandates of the major political parties of Canada

According to the election manifesto of the Liberals, nearly 1 million jobs are expected to be created through hiring programs. On the tax part, a minimum tax rule and raising of the corporate tax paid by banks and insurance companies on earnings above C$ 1 billion were proposed.

The Liberals also stated mandatory 10 days paid sick leave and a minimum wage of C$ 25 per hour to support healthcare workers and pledged to hire 7,500 doctors, nurses, and medical practitioners.

As a part of their priorities, they promised to cut down greenhouse gases (GHG) and reach the zero-emission level for passenger vehicles by 2035.

The NDP stated that it will build 500,000 affordable homes in the next 10 years and levy a 20 per cent tax on foreigners buying houses. On the healthcare and COVID-19 front, they proposed introducing a national drug coverage program and mandatory paid sick leave.

To curb the effect of climate changes, a strategy to eliminate subsidies on fossil fuels and cut down the emission levels of greenhouse gases was proposed.

As per their priorities, they commented on creating one million jobs in a year’s time, and pay 50 per cent of the salaries of the newly employed. The party stated that a tax credit of five per cent would be provided for capital investments done in 2022 and 2023. They also hold a key interest in climate change issues.

Before the election results are officially declared, and a new government takes office, some market analysts believe that several sectors will behave differently. 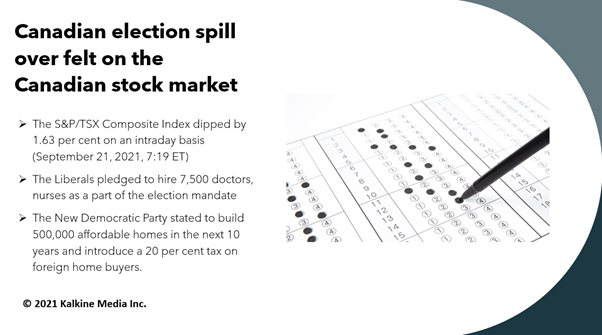 Performance of some major Canadian indexes and stocks

On the banking side, Toronto-Dominion Bank (TSX: TD), one of the largest Canadian banks, closed at C$ 81.86 on September 20, 0.75 per cent below its previous day's close price.

Royal Bank of Canada (TSX: RY) was ranked two in the ‘Top 100 Most Diverse and Inclusive Companies’ by Refinitiv Diversity & Inclusion Index on September 14. The stock price of the bank dropped by 1.51 per cent at market close on September 20.

The stock market usually undergoes a patch of volatility and fluctuation during the time of a major political and economic event. This is often followed by a correction at least once annually, as believed by many market analysts.

As Canada wakes on a new dawn, irrespective of which political party forms the government, the issues pertaining to the healthcare sector with the threat of COVID-19 still gloom. Other issues like climate change, reduction of the level of harmful gases, policies on the real estate and Canadian housing market were some of the key priorities of the political parties.