A new company venturing into the world of stock trading always excites investors. But knowing more about the company, especially about its financials and initial public offering (IPO) plans, helps make an informed decision.

On that note, let’s look into some companies that are looking to debut in Canada.

Copperleaf Technologies Inc, a decision analytics provider, announced on September 17 that it has filed its preliminary base PREP prospectus for an IPO in Canada.

Based in Vancouver, Copperleaf is known to provide enterprise decision analytics software solutions to businesses that manage critical infrastructure. The tech firm is said to use operational and financial data to help their clients make beneficial investment decisions.

Copperleaf claims to manage about 350 employees and it recently welcomed  Miranda Alldritt, who has previously worked with Teradici, Kodak and Creo, as its new president.

Copperleaf said that it plans to launch its shares, under the symbol of ‘CPLF’, on the platform of the Toronto Stock Exchange (TSX). 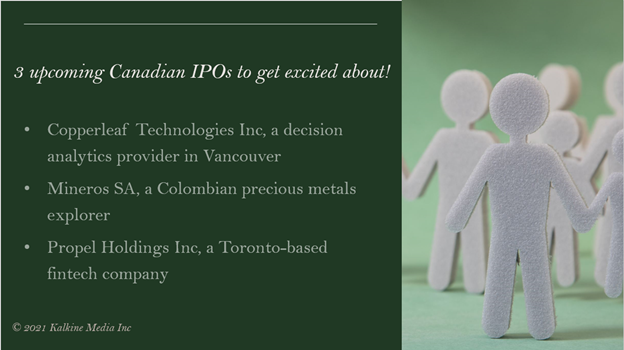 Mineros SA, a precious metals explorer, is also seeking to list its stocks on the TSX. On September 21, the mining company said that it has filed a revised preliminary prospectus with authorities across Canada, except Québec, for an IPO.

Based in Medellín, Colombia, Mineros has not yet revealed how many common shares it plans to put up for sale for how much per piece at its IPO.

However, it said that it aims to generate gross proceeds of about US$ 25 million from the IPO.

Mineros added that its offering is set to be managed by the Bank of Nova Scotia and Sprott Capital Partners LP.

Aside from its main IPO, Mineros also plans to allow its underwriters access a 30-day over-allotment option where they can choose to buy to an additional 15 per cent of the total number of shares sold as per the IPO.

The Colombian gold miner said that it plans to utilize the net proceeds raised from the IPO to pay back the debt caused by the Luna Roja Davivienda loan and for general working capital.

Propel Holdings Inc, a fintech company, announced in late September that it has submitted its preliminary prospectus for an IPO with the Canadian securities regulatory authorities.

The Toronto-based company focusses on providing access to credit using its proprietary online lending platform. Via its operating brands called MoneyKey and CreditFresh, it claims to offer credit access to over 60 million "underserved” consumers in the US.

While Propel is yet to disclose how many common shares it plans to sell at its IPO and at what price, it said that financial services players Canaccord Genuity and Bank of Nova Scotia (TSX:BNS) are set to act as its active joint bookrunner.

IPOs have been going big in Canada this year, thanks to the robust demand from investors. While the year 2020 had seen a massive surge in public debuts, despite the pandemic, 2021 is reportedly set to outpace last year.

Another point to note is that most companies going public in Canada this year are not startups from the technology sector, but older establishments seeking to pool in money to expand their businesses.

Investors who are particularly interested in debutant companies could keep a look out on these IPOs.