SUDA is in the process of developing anagrelide for treating metastatic disease in patients suffering from some specific solid tumour cancers.

Clinical experience has demonstrated that increased platelet numbers accompanying several solid tumour cancers reduce progression-free life expectancy. Anagrelide not only decreases blood platelets advantageously but has also been shown to impede cancer cell movement towards platelet-producing cells. These platelet-producing cells are termed as megakaryocytes, which are primarily found in the two likely sites of metastases - bone marrow and lung. 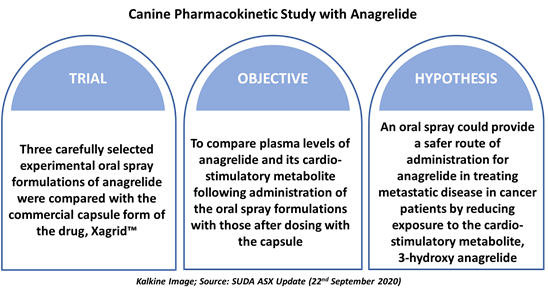 Moreover, SS-101 showed a smaller increase of 28 per cent in exposure to the cardiostimulatory metabolite compared with the capsule formulation. As per Covance Inc., these significant outcomes from SS-101 provide evidence that a proportion of the drug from the formulation reaches the bloodstream through the lining of the cheek. 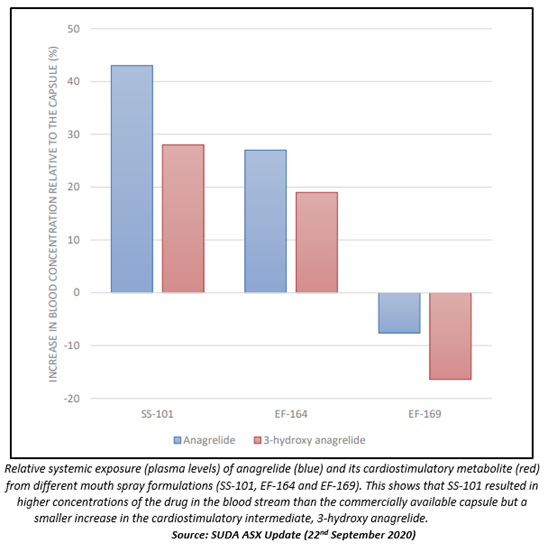 Importantly, the scale of the difference between the rise in the bioavailability of the parent drug (43% of parent drug) and the cardiostimulatory metabolite (28% of the metabolite) was unique to the SS-101 formulation. As per SUDA, this suggests that a lesser dose of anagrelide could be administered to cancer patients that would lead to a comparative reduction in patient exposure to the cardiostimulatory intermediate.

Neither EF-164 nor EF-169 formulation demonstrated a similar level of increase in bioavailability or the similar magnitude of difference between the cardiostimulatory metabolite and the parent drug.

None of the mouth spray formulations showed cardiostimulatory effects upon pulse rate assessment or demonstrated irritation in the oral cavity upon visual assessment, as reported by SUDA.

Anagrelide has already been approved for the treatment of ET (Essential Thrombocythemia), in which patients are at risk of thrombosis and have elevated platelet numbers.

However, there is a limiting factor for the extensive use of anagrelide in cancer in the existing capsule form, which is the generation of a cardiostimulatory metabolite that is produced during first-pass metabolism of the medication in the liver.

SUDA has exhibited that a proportion of the drug reaches the blood stream by crossing the buccal membrane in the mouth using one of its novel oral spray formulations. This enables improved levels of the drug to directly reach the blood stream while lowering the relative exposure to the cardiostimulatory metabolite that is produced.

The recent canine pharmacokinetic study supports SUDA’s hypothesis that an oral spray formulation of anagrelide can offer a safer alternative to the existing commercial capsule, Xagrid™, to treat metastatic disease in patients suffering from some specific solid tumour cancers.

SUDA will continue to optimise mouth spray formulation, SS-101, to ensure its stability and create a pharma-grade product. The Company intends to finalise the required pre-clinical toxicology studies before initiating clinical trials once the final formulation has been formed.

The Company expects that a reduced package of preclinical testing will be needed for the development of anagrelide’s oral spray formulation. This is because the drug has already been approved by both the EMA and the FDA for ET.

Backed by a solid cash position of $4.9 million as of 30th June 2020, SUDA intends to continue to develop a pharmaceutical-grade formulation of anagrelide with the existing funds. 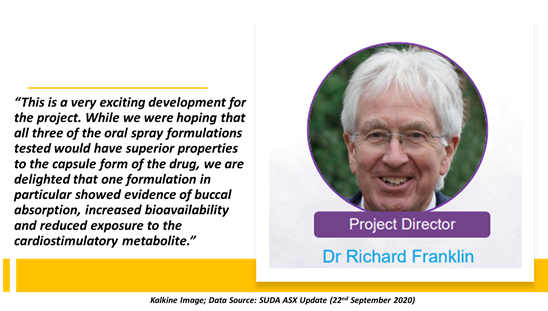