Troy Resources Limited (ASX:TRY) is an experienced gold miner with a strong background of developing and operating gold mining operations across South America and Australia for more than three decades. Currently, the gold player is cashing in on the wholly owned Karouni Gold mine in Guyana, South America.

Focuses on the Karouni Gold Project: Resurgence of the Next Big Gold Operation

Troy resources has developed five mining operations within 12 years with the bolstered focus on the flagship Karouni Gold operations which stretches over 849 square kilometres land package in the prolific Guiana Shield of the Proterozoic Greenstone belt in Guyana. 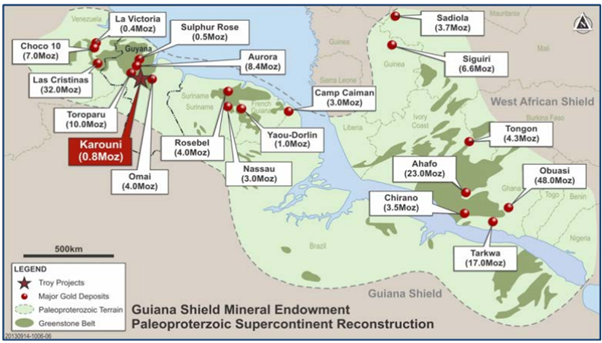 The exploration tenements located in the Karouni project area spreads over three interpreted structural corridors on the regional Makaba-Kuribrong Shear zone. The corridors are the Smarts-Hicks Shear Zone, the Goldstar Shear Zone and the Tallman Shear Zone.

Following the A$188 million merger with Azimuth Resources in 2013, Troy Resources accelerated the development of the Karouni Gold Mine with the first gold pour recorded in 2015. The Karouni Gold operations is located 36 kilometres along the strike from Omai which hosted the mega gold mining operations producing 3.7Moz Gold between 1993 and 2005. Troy’s landholdings stretched on prospective region adjacent to the Omai gold fields. 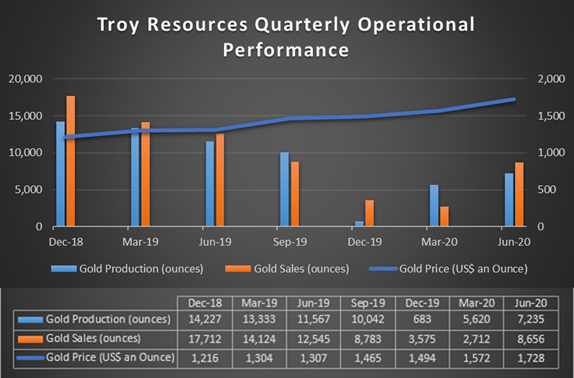 Note: The Mining operations were shut for the majority period of Dec-2019 quarter

Troy operates a processing plant at Karouni mining operations with a nameplate capacity of one million tonnes a year of ores with gold metallurgical recoveries in excess of 95%. Ever since the recommencement of mining and milling operations at the Hicks deposit in January 2020 and has been focusing on exploration in priority targets at Karouni. Karouni gold mine produced over 7,235 ounces and sold 8,656 ounces of gold during the June quarter.

Further, the project area holds enormous Exploration potential within Troy’s landholdings and has been progressing with exploration programs including drilling programs at the prospective targets.