The economic downturn following COVID-19 pandemic has accelerated and forced many consumers and companies to go for alternate payment options. BNPL firms have been gaining further momentum on ASX due to US Paycheck Protection Program (PPP), which was formed by the US President Trump’s administration to aid small companies and non-profits struggling due to lockdown measures amid coronavirus crisis.

On 6 July, the US government again opened the PPP program for small businesses who can apply for the program. PPP was initially started in April, to cover costs and soften job losses caused by COVID-19.

BNPL firms like Sezzle, Zip and Splitit, are among several businesses expected to unite with companies in manufacturing, hotel, entertainment, and construction to receive relief under the program. PPP loan would aid the current operations of the businesses and in preserving workforce by keeping the payroll intact.

Let’s have a look at 4 BNPL stocks that have been surging recently due to their incredible performance in the past few months.

The Company’s shares have been surging this week after it reported a jump in active merchants and merchant sales by 27% and 58% QoQ, respectively on 7 July 2020. It was followed by an announcement, on 10 July, for capital raising plan of A$86.3 million to speed up its growth strategy.

Sezzle grew at a record pace in 2Q20. Some highlights include:

Further, Sezzle also launched a capital raising of up to ~A$86.3 million to bolster its balance sheet and accelerate growth by making an investment in global expansion projects. The capital raising will involve:

SZL’s underlying merchant sales are likely to achieve an annualised pace of A$1.4 billion by this year’s end. The Company is well placed for the shift of North American customers and retailers to eCommerce platform as coronavirus impact is yet to dissolve.

As per an update on 12 June, Z1P reported a strong month for May with solid transaction volume and outstanding repayment performance. The Company reported that it was on track for its FY20 target of $2.2 billion in annualised transaction volume set at the start of the year. As the economy recovers from COVID-19, cautious tightening of credit and repositioning of business in the last few months have Z1P well placed to grow ahead.

Z1P which is in plans to soon acquire remaining US BNPL firm QuadPay is another applicant in line for gaining fund via US PPP.

On 8 July SPT released Q2 FY20 outcomes, wherein a rapid growth across all its performance indicators had been witnessed. Some highlights include: 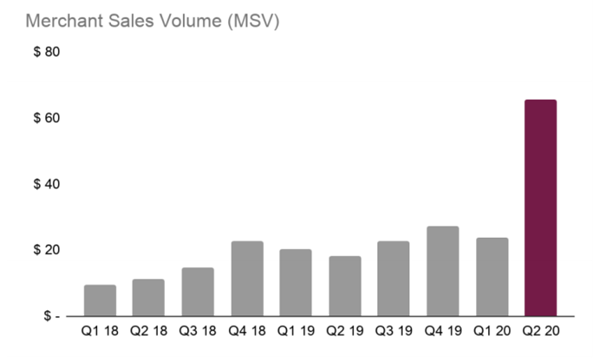 The firm has also completed integration with Stripe Connect with beta testing of new merchant onboarding. The Group also struck new partnerships with Mastercard, Finance for Group and Blue Snap.

As per an update on 7 July, the firm delivered highest quarterly underlying sales of A$3.8 billion in Q4FY20 period closed 30 June, up by 127% on Q4FY19, showing a shift towards e-commerce expenditure amid COVID-19.

While active customers rose by 116% for the firm and stood at 9.9 million for FY20, active merchants reached 55.4k (up 72%). Afterpay with operations in the US, the UK, Australia, and NZ has also planned to expand in Canada and rollout in-store in the US during Q1FY21.

The firm has also undertaken a fully underwritten institutional placement to raise A$650 million priced at A$66 per share followed by a SPP (share purchase plan) to raise nearly A$150 million for accelerating investment in sales growth and global expansion. FY21 is anticipated to be a year of increased investment for APT as it holds the solid momentum in the business and benefits from the opportunity to scale internationally.

Further, APT co-founders, Anthony Eisen and Nicholas Molnar have each agreed to sell 2.05 million shares, demonstrating 10% of their respective holdings in Afterpay.

The PPP program require companies to retain or rehire employees to the same level as before coronavirus to qualify for forgiveness of loans. Further, it requires 60% of the funds to be used towards payroll and rest towards mortgage interest payments, rent, etc with the condition that the money must be spent within 25 weeks of obtaining it.

Benefits of PPP can help the workers to retain their jobs, keeping their spending power alive to an extent. Furthermore, BNPL companies can sought to protect jobs and get fiscal relief through these loans enabling them to run their US operations more smoothly.