In an upbeat market update, Krakatoa Resources Limited (ASX:KTA) has announced the completion of the latest field exploration programs at the Sugarloaf Porphyry Cu-Au target in Belgravia Project of NSW. The Sugarloaf prospect is in the highly prospective copper gold province at the world-renowned Lachlan Fold Belt.

The Lachlan Fold Belt hosts Newcrest Mining Limited’s (ASX:NCM) Cadia valley operations, one of the largest and low-cost gold producing mines in Australia and globally, and the Boda prospect – one of the most prominent discoveries in the recent times by Alkane Resources Ltd (ASX:ALK).

Furthermore, the project is located just 7 kms SE of the Golden Cross Resources’ Copper Hill Porphyry Cu-Au deposit, which holds mineral resources of over 890,000 ounces of gold and 310,000 tonnes of copper.

DID YOU READ: Krakatoa Resources (ASX:KTA) kicks off AC drilling at Sugarloaf 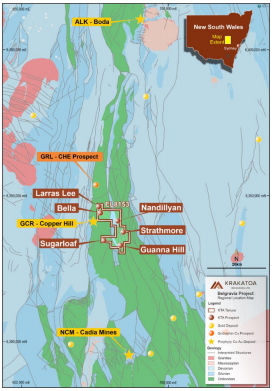 The aircore holes were drilled to relatively shallow depths of 1 to 15m averaging at 8m, since the regolith profile is thin at Sugarloaf. The original 2020 soil survey, which tested an area 850m east-west by 950m north-south, has now been expanded over the central magnetic low region and stretches over an area of 1.35km east-west by 1.65km north-south.

IMPORTANT UPDATE: Krakatoa Resources cranks up exploration at Rand and Mt Clere in May 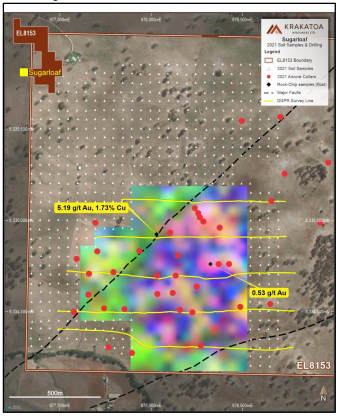 Once the results of the latest aircore drilling and soil programs are received and interpreted along with the magnetic modelling and DGPR, Krakatoa will finalise drill holes to test deeper targets.

KTA recognises the economic potential of the underlying copper-gold mineralisation associated with a porphyry formation at a depth of more than 200m. However, KTA also believes that the high-grade copper-gold veins may extend upwards from a porphyry source to form a secondary target at shallower levels, along with any deeper-seated leakage zones.