Advanced mineral exploration company, First Au Limited (ASX:FAU|OTCQB:FRSAF), has commenced a geological review of Tenement Application EL006977 under its well-funded and aggressive exploration strategy. The Dogwood prospect, which falls under the tenement, has exhibited significant potential for copper and gold porphyry mineralisation.

Dogwood prospect, located in Eastern Victoria, lies within the southern reaches of the Lachlan Fold Belt. The belt region is considered a world-class gold-copper porphyry zone with some of the world-class deposits in the vicinity, including Cadia Deposit of Newcrest Mining (ASX:NCM), Boda Deposit of Alkane Resources (ASX:ALK) and Northparkes Mine of CMOC & Sumitomo Group. 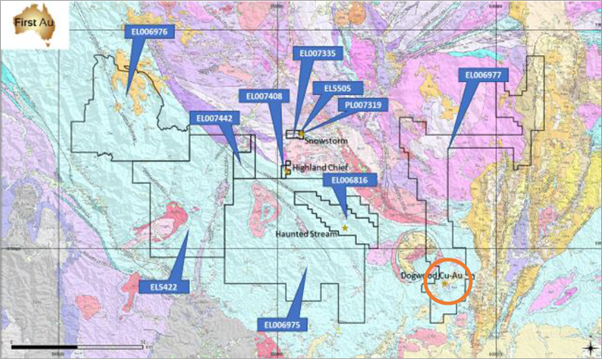 The mineralisation potential of Dogwood was established in 1980 by Australian Anglo America Prospecting (AAAP). The last drilling campaign on the prospect was undertaken by CRA Exploration in 1993 & 1994. Very little exploration work has been carried out on Dogwood in recent years. Drilling operations by AAAP and CRA resulted in encouraging drill intercept results, significant of them are shown below: -

Tenement EL006977, which hosts Dogwood, is owned by Victorian Goldfields Pty Ltd and is in the final stages of the Exploration Licence Application process. The geological team of First Au is undertaking the review of historical data of the prospect. The First Au geologists are reviewing the datasets from drilling operations, surface geochemistry and IP surveys.

The review of drill intercept data reveals the presence of anomalous molybdenum grades within the intrusion. The high-grade copper is hosted by the rocks lying above the terminus of the intrusion and around a vertical apophysis above the main intrusion.

The supergene zone contains the highest grade along a deeply weathered fault zone. The supergene chalcocite blanket has the best intercept of 13.2m @ 1.33% Cu. The intercept data also indicates that the mineralisation remains open at depth.

The Dogwood porphyry seems highly prospective upon review of the historical data and resembles the Yeoval Copper Molybdenum Resource in New South Wales. 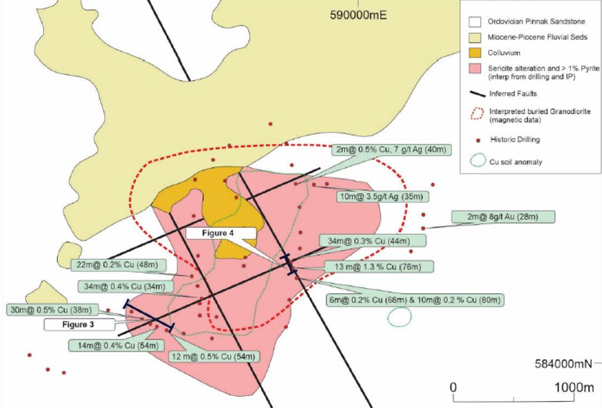 The copper porphyry prospect on Dogwood is in line with its efforts to increase orogenic gold exploration through the tenures of the Company. First Au will have further information on the prospect during the last quarter of 2021.