Travel and tourism-based companies’ return to profitability might take some time as markets reopen and the consumption resumes in the sector. Webjet OTA reported staggering performance during the first half of FY21. The digital travel business saw a significant cost reduction during the half-year period amidst the overall reduction in revenues.

Webjet’s cash position remained strong as it reported monthly cash burn down to AUD4.8 million and a closing cash balance of AUD283 million. 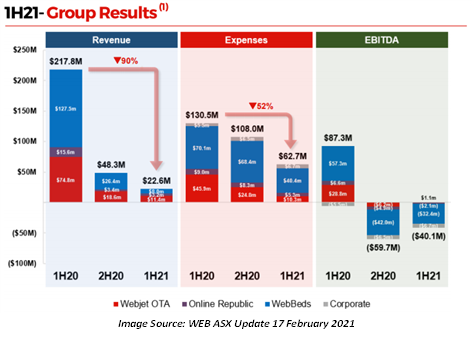 However, the company showed strength through its capital position. Cost saving in all businesses enabled the company to absorb the impact of staff returning to 100%. Additionally, WebJet was able to repay all remaining debtors over 180 days. The company also extended debt covenant waivers through to March 2022.

Webjet, however, did not declare the interim dividend for FY21. The company has also deferred its interim FY20 dividend payment, which was due to be paid on 16 April 2021. However, it is subject to review following the results for the first-half-year period of FY22.

The WebBeds business saw a reduction of 42% in costs compared to the costs incurred during 1H20. Major decrease in costs came from further headcount reductions and overheads. For the half-year period, Webjet recorded costs down 52% over pcp to AUD62.7 million.

For the Webjet OTA business, costs were down 78% compared to the same half-year period in the previous year. Costs were saved as marketing spend and other volume-related expenses reduced.

The company’s reported growth uplifted its share prices, which had been undergoing a constant decline. Webjet is currently trading at AUD4.87, an uptick of 1.4% over Tuesday.

Corporate Travel Management has also seen adverse impacts of the coronavirus pandemic and is still recovering from its aftereffects. The company experienced slowdown in its performance. However, it remains positioned for recovery.

CTM reported EBITDA loss of AUD15.7 million during the half year ended 31st of December, 2020. The company stated that despite the loss, the performance during the period was better than expected. The company’s liquidity position was strong as it held no debt. Cash balances remained at AUD119 million with a AUD178 million finance facility.

The company’s stock market performance suffered because of these results. The share price for CTM dipped temporarily by about 3%. However, it recovered quickly by about 5.7% and CTM is currently trading at AUD18.83 per share.

December 2020 reported the highest revenue during the entire half-year period, with the monthly revenue reaching AUD 17.3 million. The overall revenue for the half year was reported by CTD to be AUD742 million.

Across regions, the growth was most dominantly observed in the North America region, owing to new clients. The factors that worked for the region were T&T acquisition, proprietary technology offering and the overall financial strength of the company. The ANZ region remained profitable during the period as new client contracts came in. The European region is expected to bring in profits during February due to upcoming contracts.