Australian shares continued to trade higher by Tuesday afternoon, holding early gains, supported by buying across tech, healthcare and mining space. The market sentiment was also lifted by firm cues from Wall Street, which ended higher in overnight trade as investors cheered the US Fed’s dovish remarks on tapering its monetary stimulus.

The market also witnessed stock specific movement as some big players such as Mesoblast, Harvey Norman, Cettire, Splitit, Resimac, IGO, Bubs Australia and others released their earnings reports this morning.

On the sectoral front, seven of the eleven sectors were trading in the green zone. The information technology sector was the best performer with a 1.4% gain, followed by healthcare, which rose 1.2% by lunchtime. Among others, telecom, industrials, consumer staples and consumer discretionary were also trading higher.

Will ASX sustain gains till the close?

Meanwhile, the energy sector was the worst performer with 1.5% loss, owing to fall in crude oil prices.  The price of benchmark Brent crude oil surged to over AU$73 per barrel in overnight trade as a powerful hurricane ploughed through the Gulf of Mexico, forcing shutdowns of hundreds of offshore oil platforms.

On the COVID-19 front, NSW reported 1,164 new local cases and three deaths on Tuesday, while two-thirds of the state’s adult population received at least a single dose of the vaccine. Meanwhile, lockdown has been extended for two weeks in Canberra after the capital region recorded 13 new locally acquired cases of COVID-19. 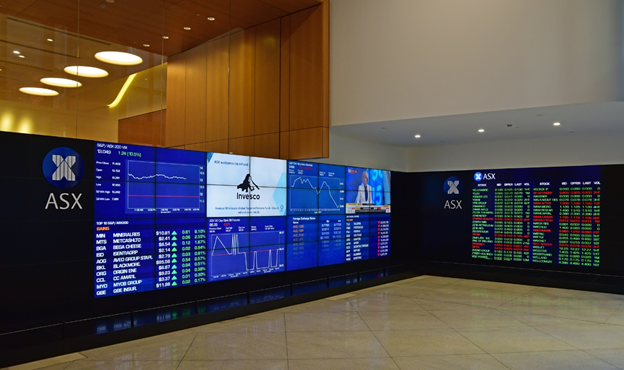 Shares of biotech researcher Mesoblast (ASX: MSB) tumbled over 11% post its earnings announcement. The company’s net loss widened to US$98.8 million in the 2021 financial year, while sales revenue dropped 77% to US$7.5 million, from US$32.2 million in the year ago period.

Shares of Aussie online bookmaker Pointsbet Holdings (ASX: PBH) were down 3% after it released its annual earnings report. The company’s loss rose more than 4 times as compared to the prior year even as it saw its revenue more than double.

The share price of Westpac Banking Corporation (ASX: WBC) dropped 0.5% after Australia’s Big 4 lender completed the sale of its lender mortgage insurance business. The bank had sold insurance business to Arch Capital Group and entered into a 10-year supply agreement with the company.

Shares of online retailer Cettire (ASX: CTT) has reported strong annual earnings and has also upgraded guidance for the next fiscal. The company’s gross revenue surged 333% year-on-year to AU$124.5 million in FY21, while sales revenue jumped 304% to AU$92.4 million.

Travel business Webjet (ASX: WEB) shares were up 0.7% after it released a positive trade update. The company claimed that it will be cash flow positive in the first half of the 2022 financial year as its post-COVID strategy is delivering results.

Shares of Bubs Australia (ASX: BUB) slipped nearly 4% after the infant nutrition and dairy business reported disappointing annual earnings. It posted a loss before tax of AU$77.8 million in the 2021 financial year, compared to AU$16.1 million loss in FY20, impacted by COVID-19 disruptions.