Residential developers have depicted the signs of persisted slowdown during the last year in their recently released full-year results. However, REITs and commercial developer like Charter Hall Group has posted decent results, but with a slightly lower profit compared to the previous year.

Meanwhile, the green shoots have been acknowledged by the residential developers in the industry, which is backed by fiscal measures, and monetary stimulus. Villa World mentions that tax offsets, falling interest rates, improvement in credit availability, and the governmentâs focus on first-home buyers provide upside to the residential businesses.

Concurrently, AVJennings noted that the gloomy property days are over, and market sentiments have started to improve driven by favourable market fundamentals of tax cuts, rate-cuts along with relaxation in minimum mandatory servicing requirement by APRA for retail banks, which would be considered while assessing mortgage applications.

Meanwhile, the group distributed AU 33.7 cents per security in distribution during FY19, up by 6% from AU 31.8 cents per security in FY18. Besides, the group raised $3.4 billion of gross equity issues during the year and deployed $5 billion in gross transactions. Importantly, the funds under management stood at $30.4 billion as on 30 June 2019, an increase of $7.2 billion over the previous corresponding period. 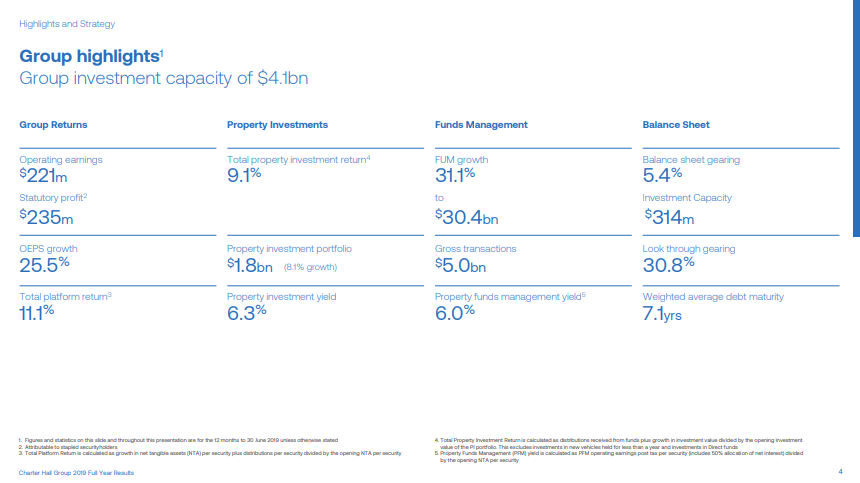 Meanwhile, funds management portfolio (FUM) grew to 844 properties with 3,419 tenancies, WALE of 8.2 years, and delivered a net rental income of $1.7 billion. Besides, the FUM was driven by acquisitions, positive revaluation of $1.2 billion while capex on developments was $1 billion.

Reportedly, the company had $6.3 billion of new and refinanced debt facilities with no material maturities in FY20 period. The weighted average maturity of the debt was 7.1 years with balance sheet gearing of 5.4% (net of cash). Besides, the group had cash of $114 million as on 30 June 2019.

As per the release, the group anticipates achieving 18-20% growth in post-tax operating earnings per security in FY20, considering no material change in current market conditions. The FY20 guidance included CHOT performance fees of $132 million, payable in April 2020, and $50 million was accrued in FY19 earnings.

Besides, the group expects to report 11-13% growth in post-tax operating earnings per security during FY20 over FY19, after removing the impact from CHOT performance fees. Further, it expects to deliver a distribution growth of 6% over FY19. 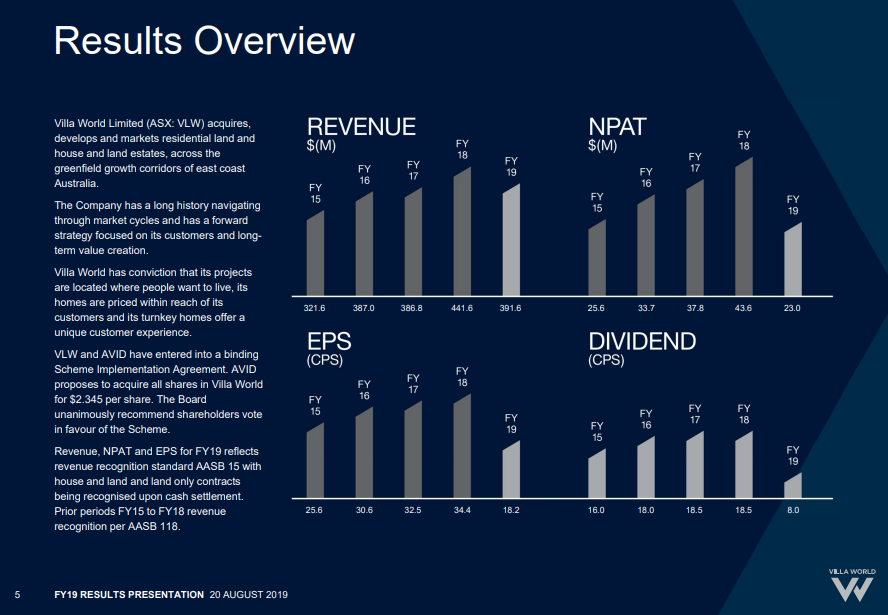 Reportedly, the company is amid acquisition by AVID, and it had entered into a Scheme Implementation Agreement with AVID. AVID has proposed to acquire all of the shares for a consideration of $2.345 per share.

Besides, if the scheme is approved and applied, the board of the company proposes to declare a special dividend (fully franked) of 31 cents per share. Subsequently, the scheme consideration will be reduced to $2.035 per share if the special dividend is declared. Further, the company expects to dispatch Scheme Booklet in September 2019, and the shareholders would be able to vote on it by mid-October 2019.

As per the release, the revenues were driven by cash settlement of strong carried forward sales along with increases in average revenue per lot. The reported gross margin was down to 23.7% in FY19 from 25.2% in FY18 but within the companyâs range of 23-25%. Meanwhile, the company has been engaged in joint venture arrangements, which delivered a fee income of $1.3 million, and the share of profit from the JV stood at $2.1 million.

As per the release, the company intends to focus on operational delivery, along with cash settlement of carried forward sales. It would continue to manage the business cost structure due to current trading conditions, and cost-optimisation in 2HFY19 to be realised in FY20.

Meanwhile, the company would focus on improving sales during the FY20, and it expects gross margin to be in the range of 23-25%. Besides, the development management fee revenues from JVs would be consistent. 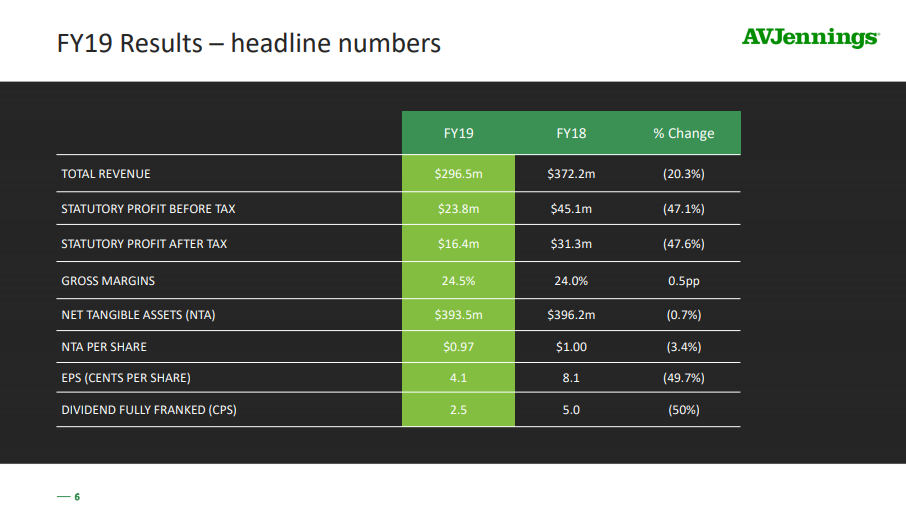 Reportedly, the subdued profit was the result of softer market conditions majorly in Melbourne & Sydney. The settlement of contracts signed during the previous periods allow to improve the results of the company, and these contracts carried favourable margin from the project in Victoria & New South Wales.

Besides, the land inventory of the company rose to 9,531 lots in FY19 compared to 9,373 in FY18 at the year end. The residential developer had signed an agreement to advance a 3,500-lot greenfield site at Caboolture.

As per the release, the company had 1600 lots under development as of 30 June 2019, which were 18% less than FY18 year end. The company had settled and initiated the development of Ara Hills in New Zealand along with the acquisition of the remaining 50% interest in âRivertonâ in Jimboomba, Queensland.

Reportedly, the company noted that customer visits at sales offices & online had seen some improvement, and it expects this trend to continue over FY20. Besides, the company has advanced a number of existing projects, particularly in South-East Queensland, and it would improve the number of projects actively selling in FY20 period.